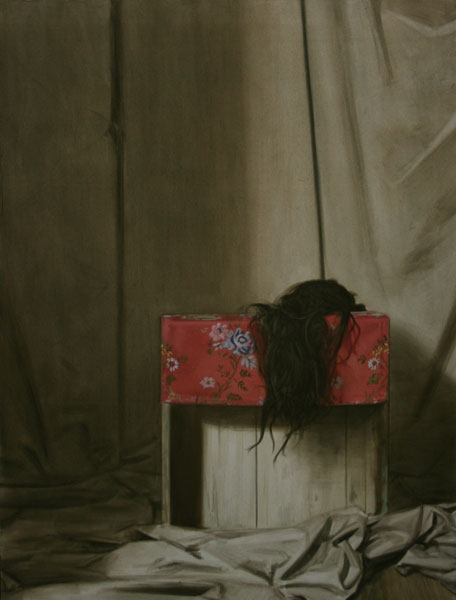 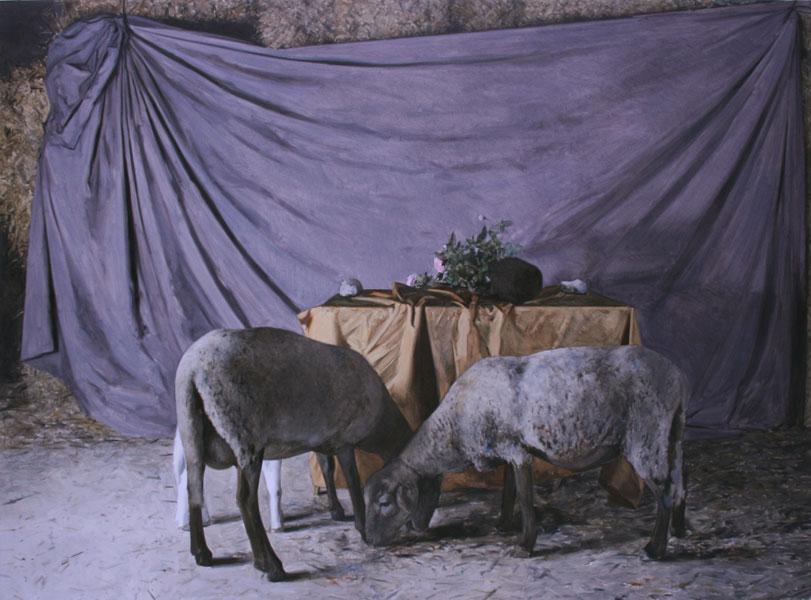 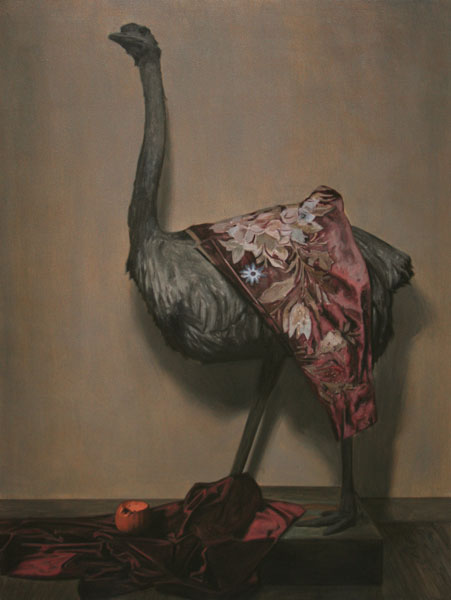 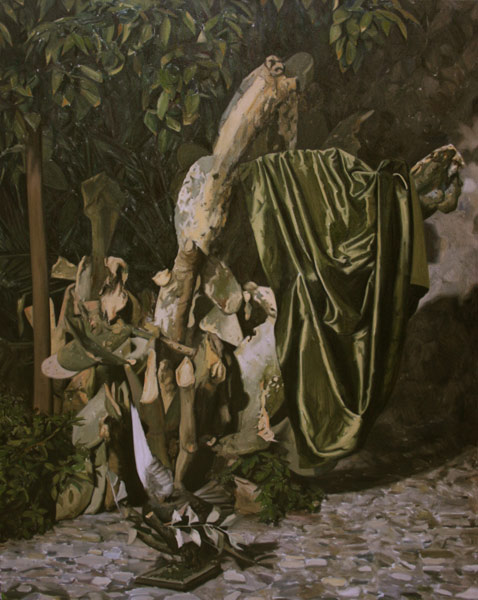 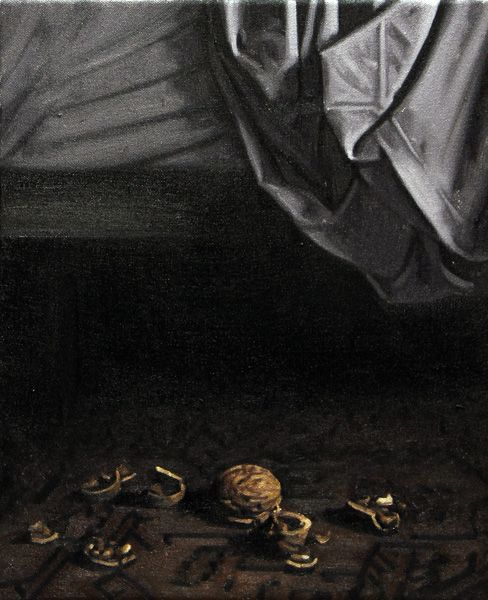 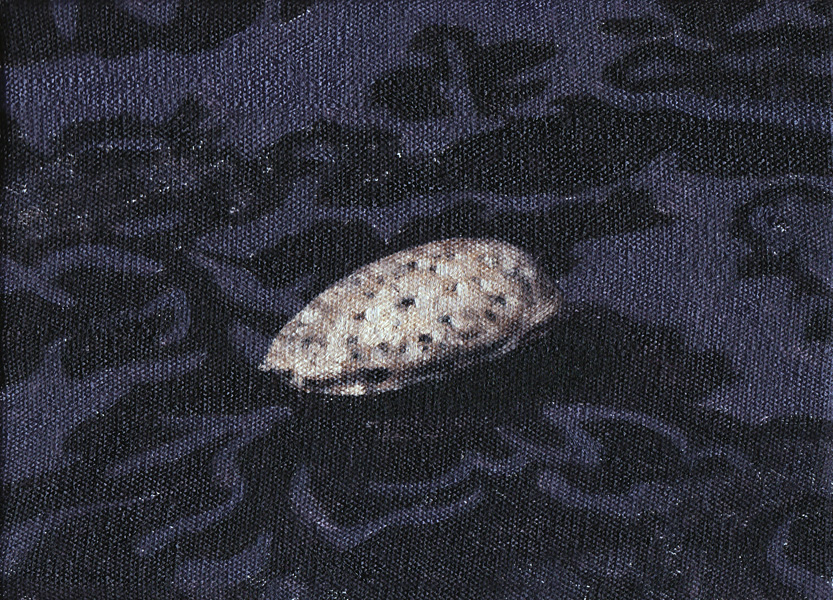 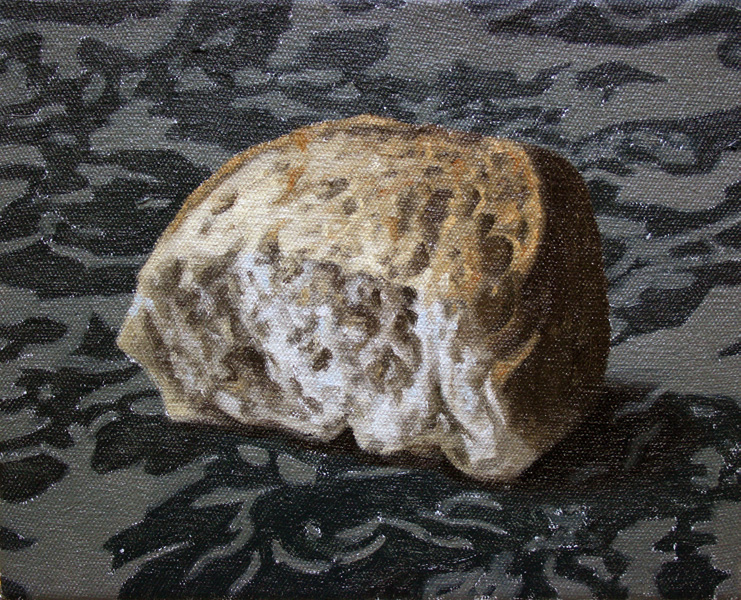 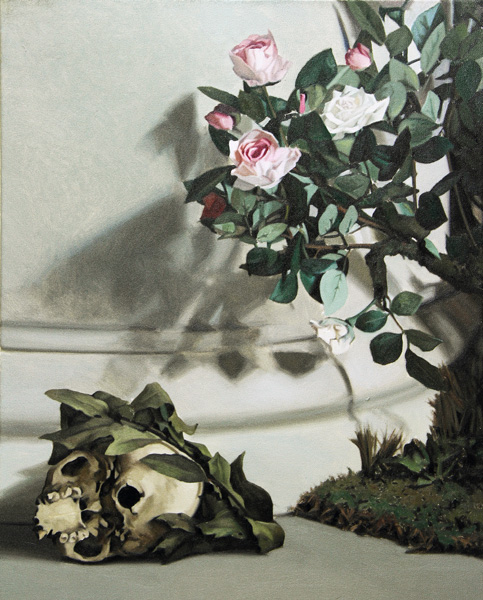 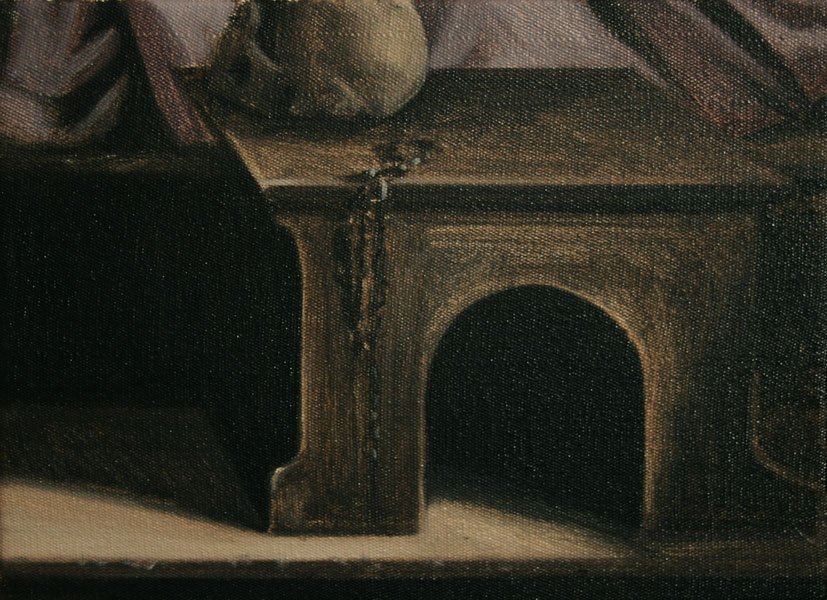 Rumia is the title of the third solo exhibition of ANTONIO MONTALVO at Espacio Minimo gallery in which a selection of paintings belonging to the work done by the artist in the last four years is shown.
About this work, Oscar Alonso Molina, in his text, Antonio Montalvo, the alienated told in scene, reads as follows:

Because the people have forsaken me and have profaned this place by making offerings in it to other gods whom neither they nor their fathers nor the kings of Judah have known; and because they have filled this place with the blood of innocents
-Jeremiah 19: 4-
Paint animals as if they were still lifes; naked as they were animals; still lifes as if they were bodies… seems to be a simple trick, a sort of maniera where things are what they seem but at the same time, something that looks through them with discretion. Although, you can see, is not so simple, because that discretion here does not necessarily imply restraint or moderation, not even the absence of tension, lightness; no, it disturbing that is seen in the scenes of Antonio Montalvo wins the spectator’s consciousness almost brutally I would say that, at least with certain rawness. Inside, behind the most anodyne appearance-some cloths, some nuts, flowers, fabrics and draperies, cattle farm- kneaded unfathomable, what will manifest at some point to leave us speechless in front of the image, which, moreover, until then hardly be much to say … also the presence of evil has been present characteristically well in the film language, heritage of Gothic literature and horror nineteenth where the model is very abundant, and with that Montalvo world shares a taste for the charged atmosphere, the effects of tempered and rarefied light, some deliquescence of what is presented on stage. Indeed, in the latest painter work there is a whole subtext that points to the liturgy and drama, the most varied ritual aspects, from religious and ecclesiastical until fetishists, dotting the way here and there that beings and goods facing the table, the compositions parallel to the plane of representation. The disorder is announced in form-and aims- to deal with the classical genres, is therefore extends to the moral sense of these small but terrible assemblies whose explanation is never completed in abeyance the sense of what we see. Montalvo in his painting always takes one of two options: roll over on details and close-ups that leave out framing what justifies his approach to that particular point in the set, or recreate assemblies with a greater structural complexity and surrealistic air, from where points, never set, allegory. Thus, compared to the detailed attention they receive on their part a crust of bread, some shells, a handful of antlers, or a waste of butchery, enigmatic in its simple and direct being in the world, pure symbol content, we deploy allusions pulled off in the other images, where the animals, who knows whether alive or stuffed, mixed with rags and furniture in the most baffling contexts, while the human body, when it appears, naked, sometimes bound, does not explain to us if he suffers or enjoys, nor the flowers there we see allow us to deduce whether they are fresh or dried, whether they are natural or artificial … that sense closed, obsessive and tragic existence manifested in the recent work of Montalvo really do not I know where it is distilled; befits certainly not a few gifted painters who love with suffocating ardor ancient art, whose passion takes on the texture of the relic: Magic but dim, capable of working miracles since the resignation to full reincarnation, to full life … painting Borremans, or our Jorge Diezma, not to go that far, are proof so baffling mix between luxury and mourning, the mixture is, needless to say, one of the keys of the baroque aesthetic effects. Montalvo shares with them a unique ability to tell how terrible that nests in which currently only begins to thin, to unravel as enigma of the visible, speaking as from elsewhere. The other genealogy I would like to propose to the ineffable quality of the painting Montalvo, that that, as I say, suggests that everything in it seems doomed to a natural-and not necessarily even the sweet- death has to do with that distance from romanticism to symbolism took other artists in finding the untreatable in the world, this is just what it gets really interesting and brings it to become stage, opening our resilience.