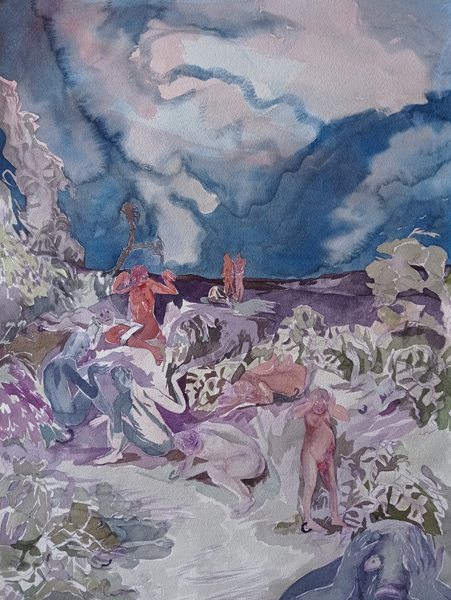 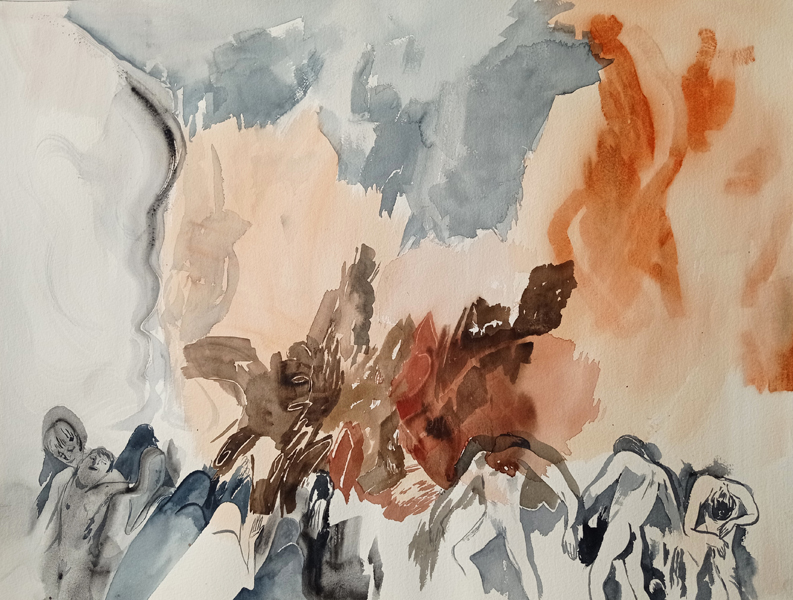 In his first solo exhibition in Spain at the Espacio Minimo gallery, curated by Omar López-Chahoud, the Mexican artist HÉCTOR JIMÉNEZ CASTILLO presents works created for the occasion, which seems to have been made in the transition between sleep and awakening, or after a long wakefulness or insomnia. They could be called ‘bed drawings’, ‘lectulo graphis’ or ‘imago-noctámbula’ and they are the result of a process without prior judgments, where both the silhouettes and the space-background relationship between them are distorted. The figures propose choreographies, moments of proxemics and gaze games in these environments. It is an approach to action through drawing, a relationship between the body and its possibilities within a visual universe that requires its own laws and rules.

Jiménez Castillo‘s work is influenced by intuition, chance, and the use of aspects of his own biography that emerge from the body as a catalyst and mediator of experiences, context, and knowledge. His artwork frequently describes human vulnerability and examines identity and intimacy. The Mexican artist investigates the production of images that are inspired by our unconscious and explores them in different media that include choreography, texts, drawings and sculptures. His work process can be best described as a methodical organization of an unveiling of his own reality and that of others while he plays with the notions of chance.

He has collaborated with theater companies such as Compañía Opcional, and Teatro Ojo in adition he is the co-founder of the Arrogante Albino collective, a laboratory of artists whose practice could be considered a collage of different artistic media where the body is, simultaneously, the fundamental theme and the working tool.

Interested in artistic practice as a modeler of the thoughts of those who consume it, Jiménez Castillo speaks of his work thus: The process is simple: it is worked daily and without judgment, the resulting images propose new stimuli and materials for the space of the unconscious, where they combine the myth, the erotic, the mystical, or the omen. I think there is something in this artistic practice beyond what is already said in the streets, squares and parks, something more linked to the world of poetry, governed by its own laws. This exercise of poetic beginning allows inhabiting a possible third world, spaces of empathy with the murderer, of representational holes, this new vehicle is not necessarily pleasing to the eye and does not respond to the laws of reason. [...] A quarter of my work consists of doing costume design for projects in my city, and the other part is a process divided between drawing, reading, writing and action essays that determine the routes to work, generally obsessed with the immaterial world, mythology and images of Western painting.

The bulk of the exhibition is made up of works on paper, watercolours that portray his highly personal and disturbing formal universe and is completed with several pieces in which the pictorial and sculptural elements dilute their borders, until they almost disappear. Finally, an installation with two singular works, two stained glass windows, both laser engraved and suspended from the ceiling on chains that formally evoke the iconography of the tarot.