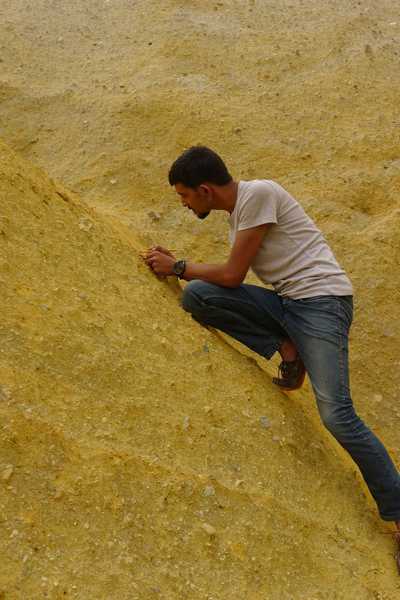 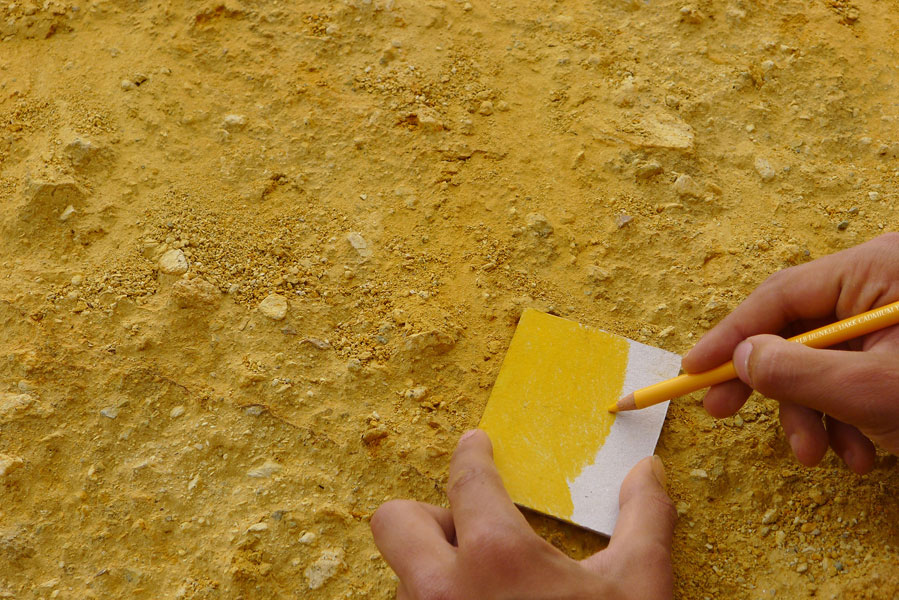 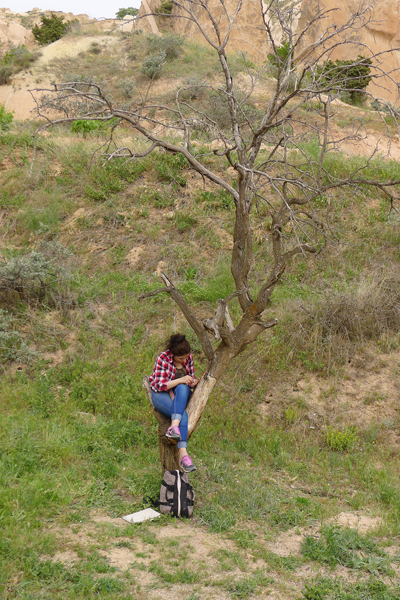 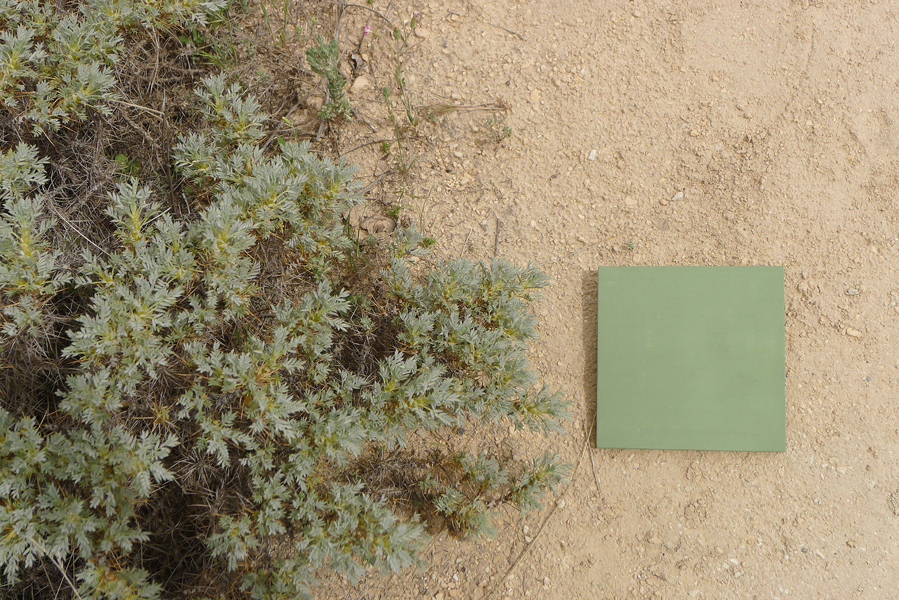 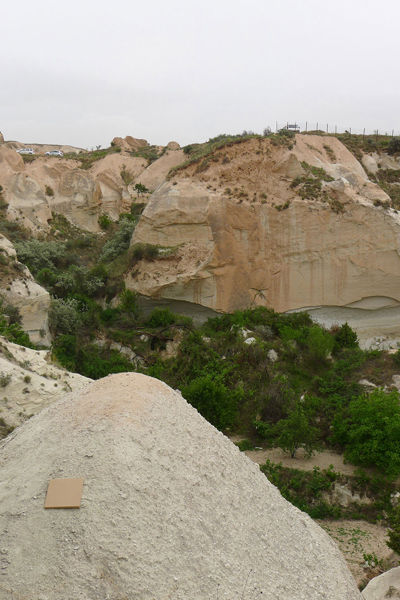 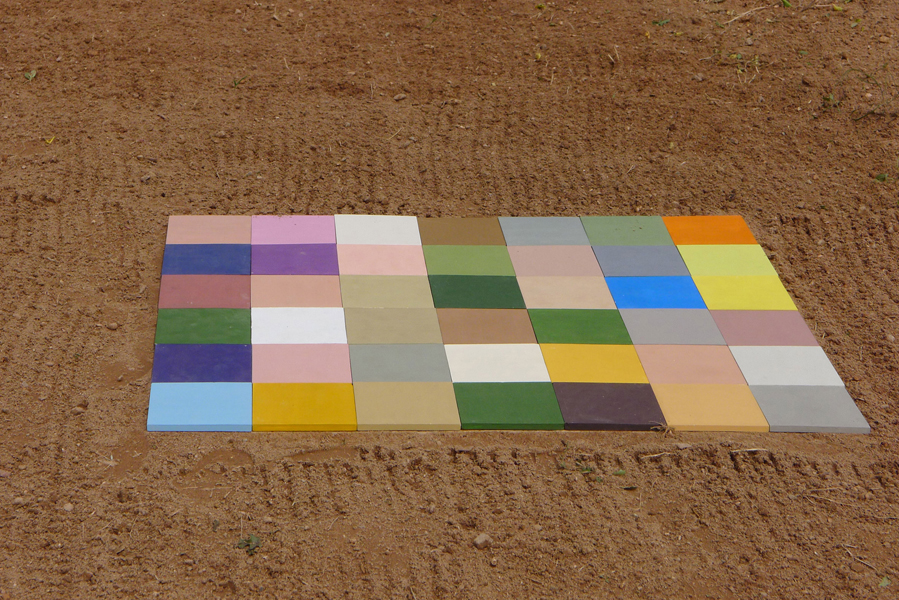 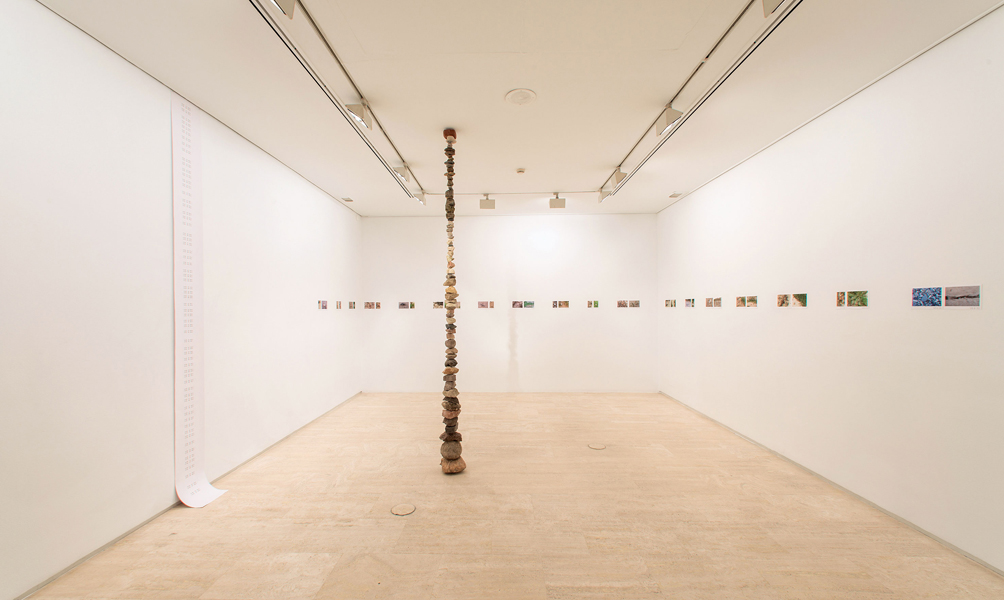 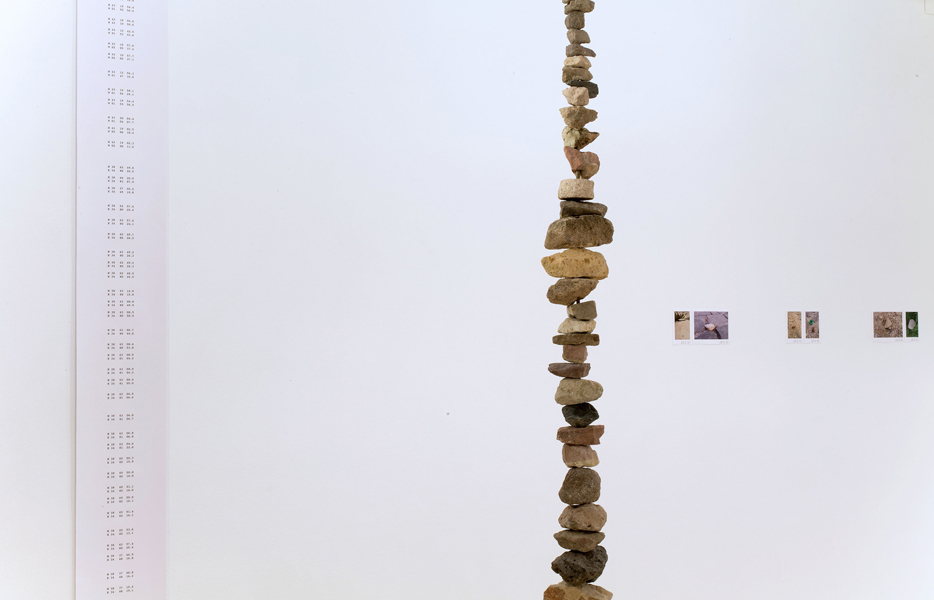 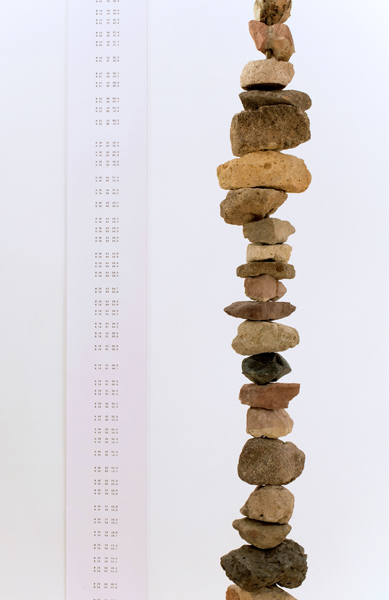 Zoom In, is the tlttle of the first solo exhibition of MAIDER LOPEZ for Espacio Mínimo Gallery and it is the beginning of their profesional relationship. That Project is completed with two more that are exhibited in parallel in two different locations (Moving Stones at Geomining Museum of Madrid and 25 People on 25 Hills, 25 People on 1 Hill in the Stand Espacio Mínimo of ARCO_madrid 2017) and that complement each other.

Zoom In proposes a way to experience the landscape through the color of certain elements of the environment. It tries to create a focus on the look, as well as establish a dialogue between the specific and the general. The work suggest to the viewer a new way of perceiving the landscape and the posibility of discovering new says of seeing and feeling nature.

When I walk through the small paths on the mountains and valleys of Cappadocia, -the artist says- I can not focus on something concrete, impressed by the vastness and beauty of the landscape, my wandering eyes cross the landscape from the surface, usually unable to focus on something specific. With this project MAIDER LOPEZ tries the opposite, she puts the focus on certain elements of the landscape through colour, to rescue them, to sing them out, to individualize them from that generality that masks them.

For this the artist marks the landscape through coloured tiles. As you walk along the paths of Kızıl Çukur, you find monochrome tiles, pointing out a specific element of the landscape in which we can find the very same color: the yellow of a mountain, the grey of a stone, the blue of the beekeepers or the specific Green of a particular plant. These chromatic similiarities were established during the realization of a workshop with art students of the Department of Painting of the University Nevşehir Hacı Bektaş Veli previously, through the direct exercise with nature and the search of each specificity for its later graphic documentation and its final transfer to the exhibition space. There the viewer can experience not only the final work, but the process carried out by the artist, creating a new level of perception that enriches and extends the Project’s diversity.

The exhibition is completed with the piece called Column in the lower room of the gallery which is part of Moving Stones – a series of walks through Capadocia serves to select, transport and relocate stones along the way with minimal transformation gestures of the landscape that are exhibited through both graphic and cartographic documentation, pointing out the coordinates of collection and destination of the stones – this work is exhibited in parallel at the Geomining Museum and furthermore, with 25 People on 25 Hills, 25 People on 1 Hill – were a group of twenty-five people is summoned to occupy twenty-five hills. Subsequently, the same group of people is relocated in a single hill, articulating the action around the ways we relate to each other and the different ways that people settle, dwell and inhabit – which will be showed at the ARCO stand of Espacio Mínimo Gallery in February, complete the project, produced in the context “Cappadox 2016″.

MAIDER LOPEZ (San Sebastián, 1975), develops her work intervening on the public space and the architecture. Her Works often require the participation of the viewers making them part of a subtly altered space.

She has been extensively exhibited national and internationally. She has participate at the Biennale of Venice of 2005 (The Experience of Art, 51 Biennale di Venecia), Sharjah 2009 (Provisions for the Future, Sharjah Biennial 9, United Arab Emirates) and Estambul of 2013 (Mom, am I Barbarian 13th Istanbul Biennial). She has done, also, projects in the public domain and showed in Museums like: Matadero Madrid (1645 Tizas, 2016); Koldo Mitxelena of San Sebastián and MARCO de Vigo (Desplazamiento 2015 y 2016); Les Ateliers of Rennes, 4a Biennale d’Art Contemporain, Rennes, France (Play Time, 2014); Lower Austria Contemporary (Mountain, 2013); Skor and Witte of With, Holland (Polder Cup, 2010); Pompidou-Metz Centre (Eclats, 2010); SCAPE Christchurch Biennial of Art in Public Space, New Zealand (2008); Chacun à Son Goût. Guggenheim Bilbao (2007); or Caixa Forum, Barcelona (Columnes, 2006), among others.