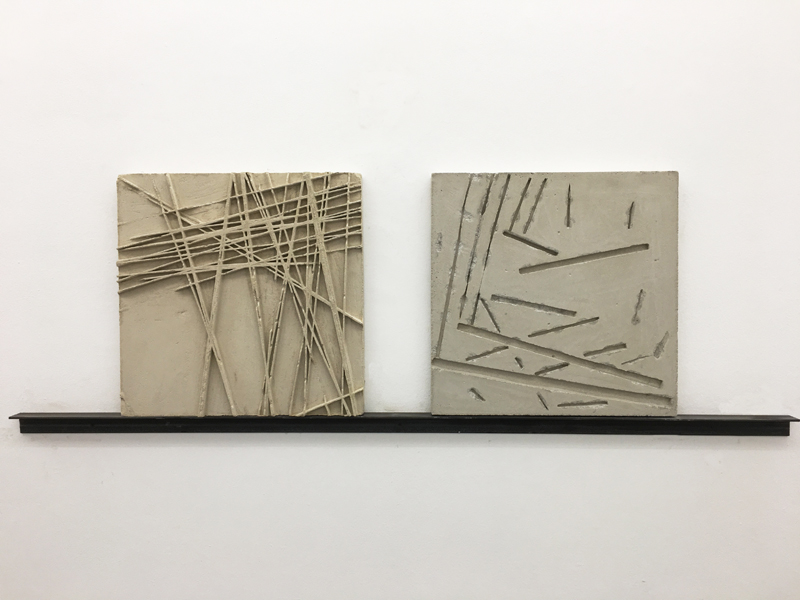 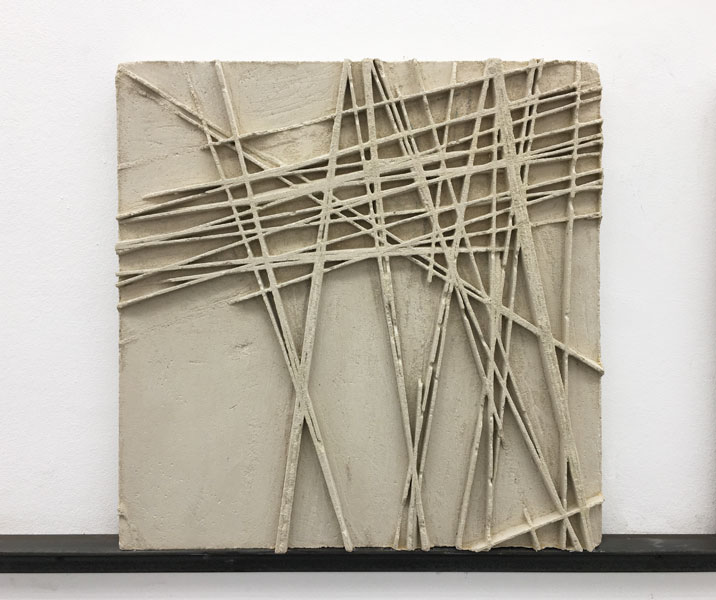 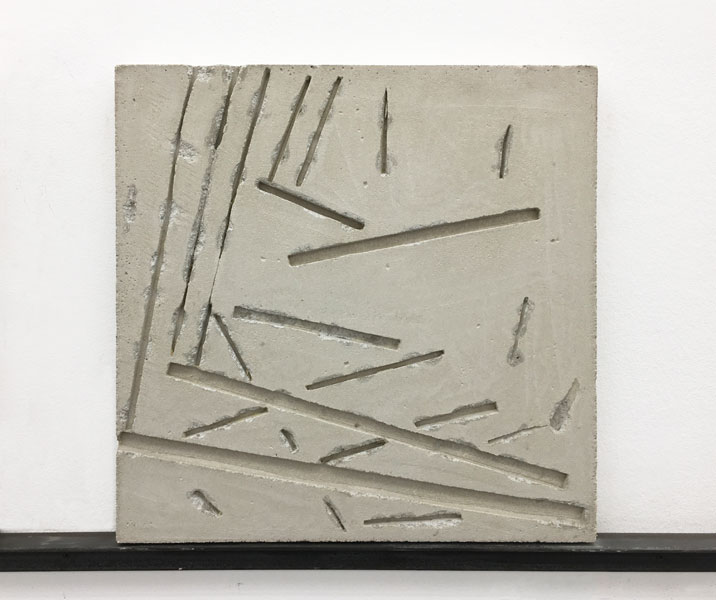 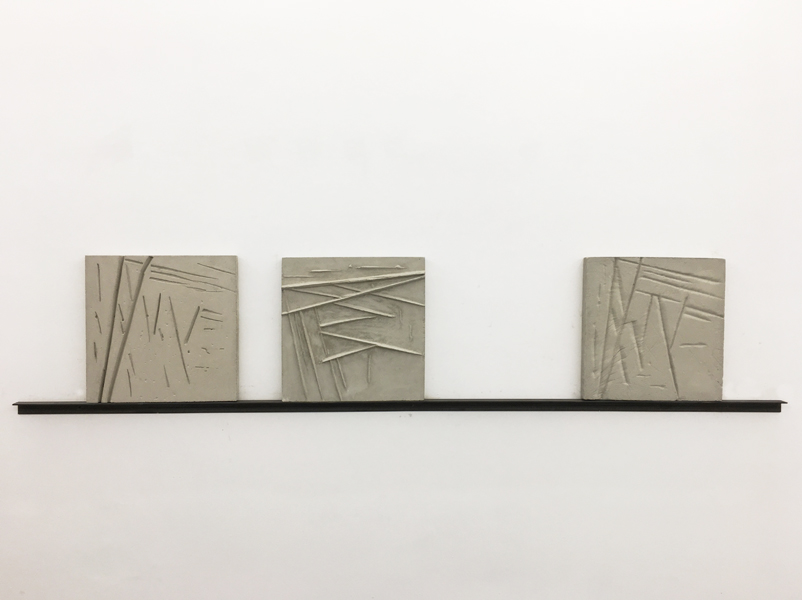 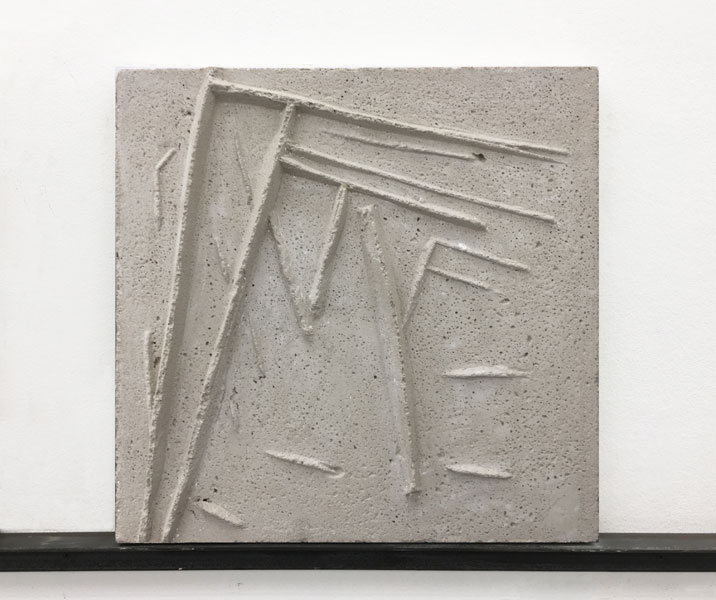 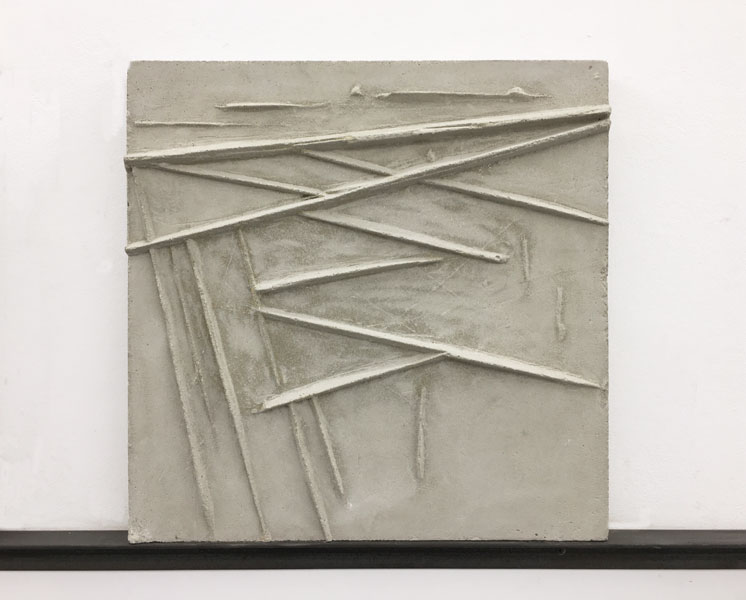 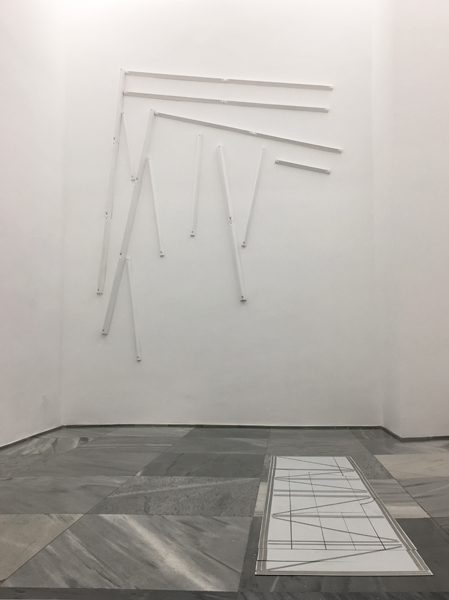 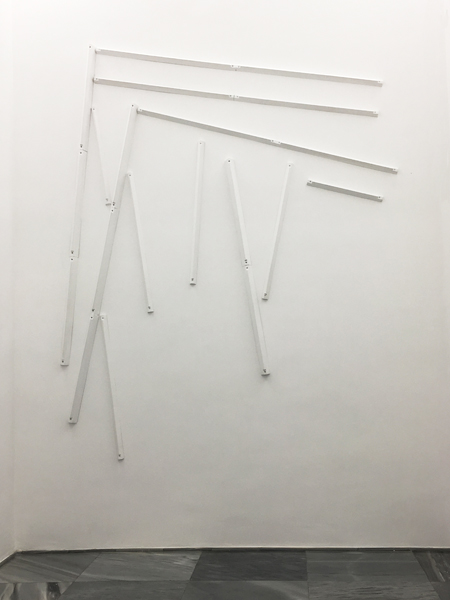 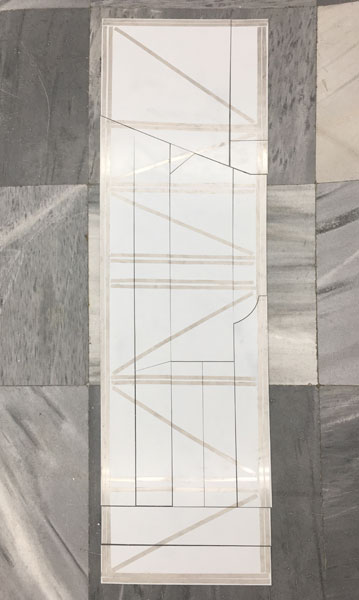 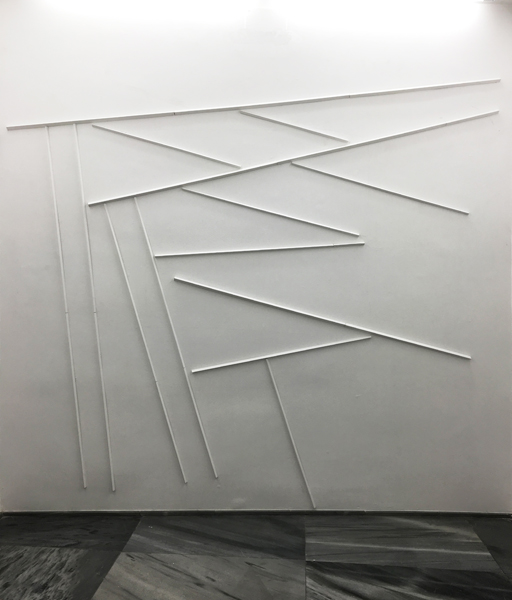 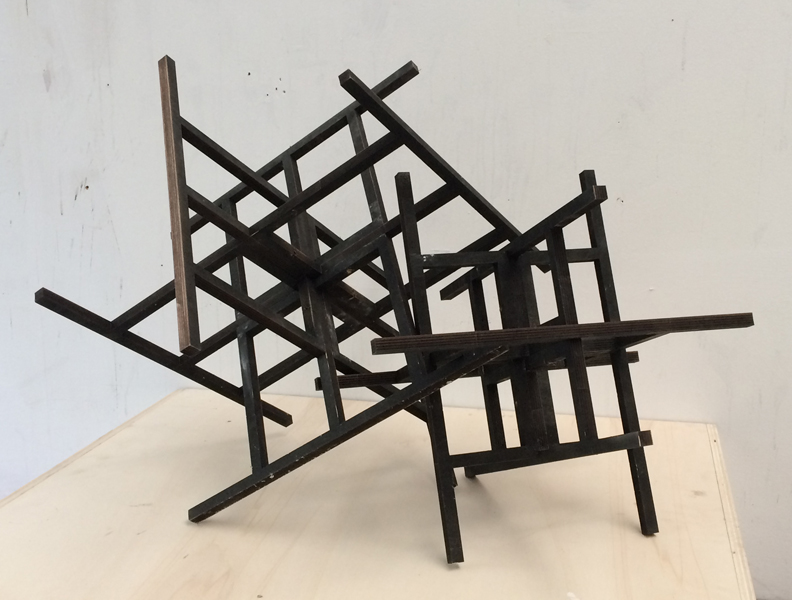 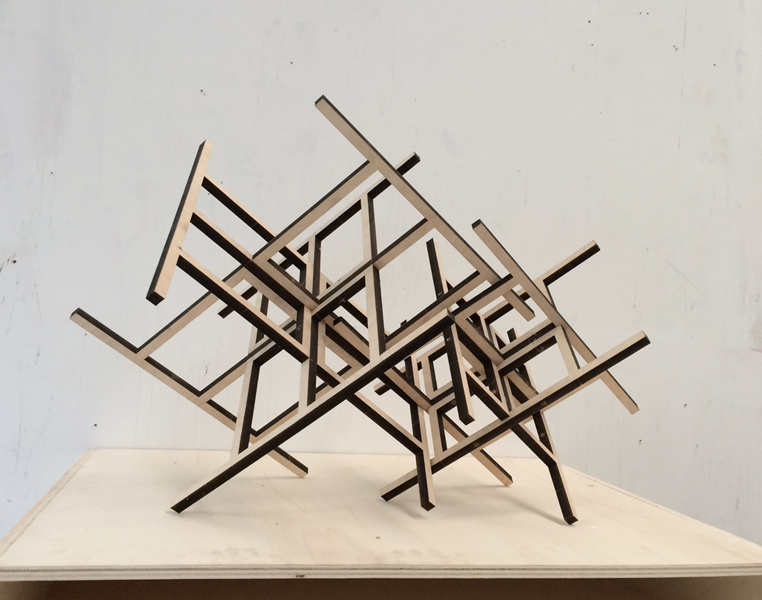 Du, da (tiene, es), title chosen by MANU MUNIATEGIANDIKOETXEA for his fifth solo exhibition at Espacio Mínimo gallery. It is a combination of words, in Euskera first and its equivalent in Spanish in parentheses (has, is – would be the traduction in english), which is used to make, again, a set of misunderstandings, double sense or meaning which illustrate or give some clue about the evolution of their work.

The pieces that make up the exhibition have a sought after appearance of work in process, unfinished, almost a prototype. The materials used in his execution by the artist, cement, wood, steel or plaster, are the raw materials of any constructive project and the practical absence of color or any manipulation in the finishes reinforce that sense and accentuate its aspect of constructive elements in most of them.
These constructive elements correspond to a discarded biography, fragments, pieces. It is a work that starts from the remains of the workshop, in this case the ruins and pieces that have remained of previous projects, in which the marks of its first execution, the accidental blows or the passage of time, have worked and have marking its new formal and conceptual coordinates.

A subtle work that plays to be unfinished, as if it were still in a procedural state, as if these works were open tracks, undeveloped pieces that have been waiting for their future in the studio, or were too advanced for the moment in which they are created time ago. A little bit as if they were also the result of the work of time, waiting and action of events beyond the will of the artist, sometimes catastrophic accidents provoked and other more subtle or casual.

The artist says about the works of this project: It is like if I had gone down to the basement  of my studio and removing the dust I would have found them, as if they had always been there, but I had not seen them. And finally they would tell me the way to go in the future.

MANU MUNIATEGIANDIKOETXEA (Bergara, 1966), graduated in Fine Arts from the University of the Basque Country in the specialties of Painting and Sculpture. He has exhibited individually in institutional halls like Sala Rekalde of Bilbao (Ni ez nain hemengoa in 2004), CAB. Centro de Arte Caja de Burgos (Baga biga higa in 2007), Koldo Mitxelena Kulturunea in San Sebastián (Behar Gori Primavera Azul in 2008), La Conservera de Murcia (Night Flight in 2010) and the Jorge Oteiza Museum Foundation in Alzuza, Navarra (Interpretations 7 in 2014) and in outstanding collective exhibitions such as the Young Art Exhibition (Spanish Museum of Contemporary Art, Madrid 1994), Mutant Painting (MARCO, Museum of Contemporary Art, Vigo 2006) or Future Plans (Baluarte, Pamplona 2007). He has participated in important international fairs such as ARCO, FRIEZE ART FAIR, ART BASEL MIAMI BEACH (in the 2004 edition with the individual project Orain, Berriz, Gulliver in the Art Positions sector) or CIGE. China International Gallery Exhibition (in 2008 with the individual project The Forest of Ozú / Ozú’s Forest). He has obtained, among others, the First Generation 2000 Award of Caja Madrid, the Gure Artea Prize of the Basque Government in 2000, the Endesa Scholarship in 2001 and the Altadis Scholarship in 2005, among other outstanding public and private collections in The Museo Nacional Centro de Arte Reina Sofía in Madrid, the ARTIUM Museum in Vitoria, the University Museum of Navarre in Pamplona, ​​the CIFO Fontanals Cisneros Foundation in Miami, the Union Fenosa Collection in La Coruña, the Contemporary Art Collection Patio Herreriano Museum in Valladolid, CAM Collection of Valencia, the Altadis Collection, the Caja Madrid Collection, the Kutxa Collection, the Caja Burgos Collection, the Junta de Extremadura Collection, the Autonomous Community of Murcia Collection, the Alava Museum of Fine Arts, the Banco de Spain, the L’Oreal Collection, the Coca-Cola Spain Foundation or the Pamplona and Vitoria City Halls.