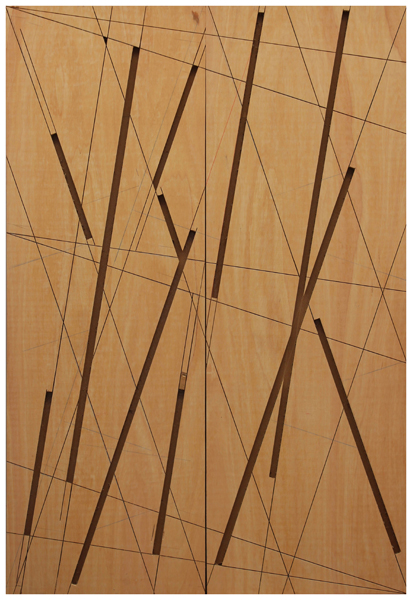 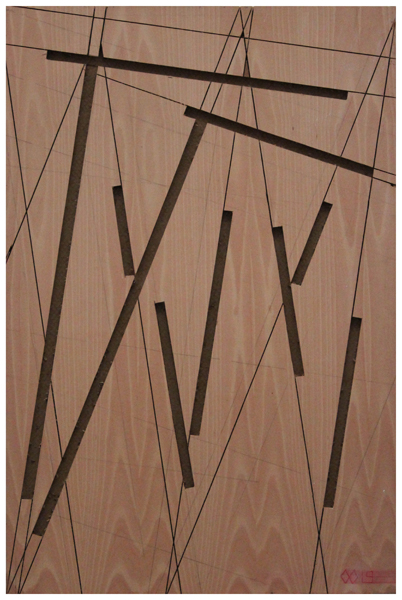 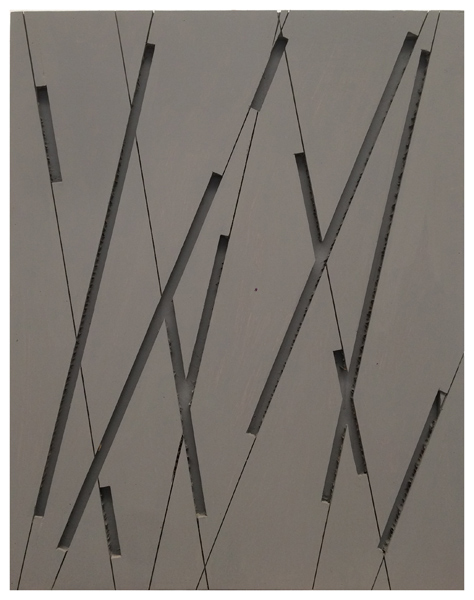 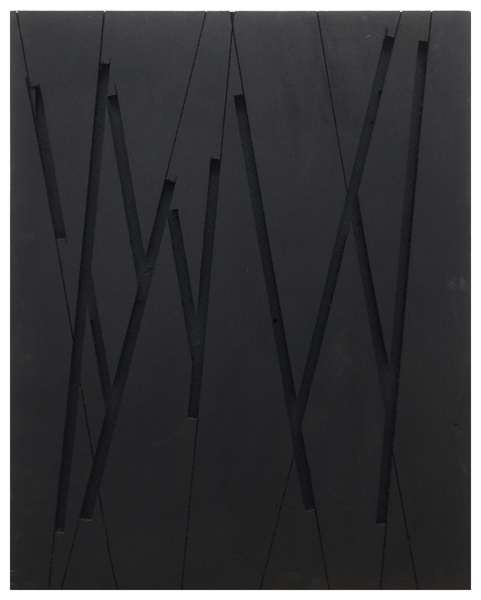 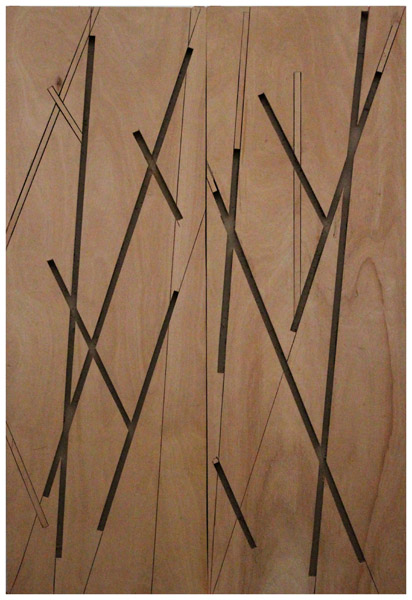 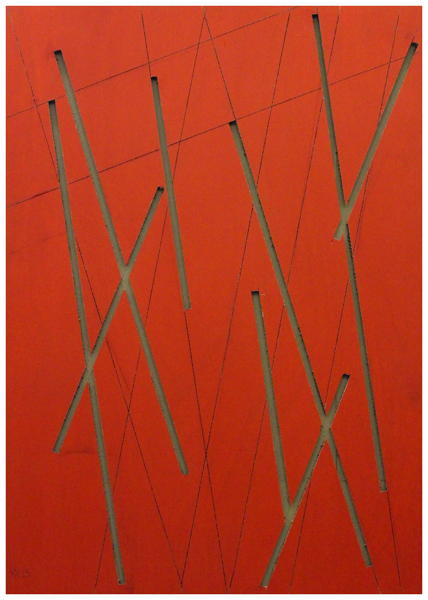 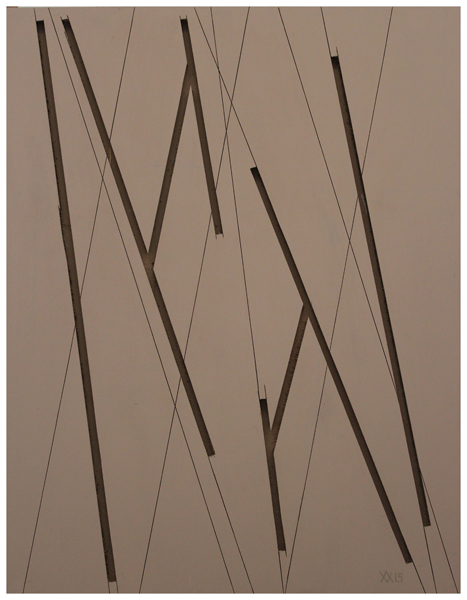 Mutxikina, geometra de la resta (Mutxikina, geometry of the subtraction) is the title of the sixth solo exhibition of MANU MUNIATEGIANDIKOETXEA in Espacio Minimo gallery. It is composed of a set of works, paintings and sculptures, expressly made for the occasion in which the dividing line between then is even each subtler.

Mutxikina, is a word in Basque that designates the rest that remains after eating an apple, the heart, and that represents for the artist the metaphor on which his exhibition project revolves.

In geometry, a toroid is a three-dimensional surface that results from spinning a circle around an axis that does not cut it, such as a donut, a bagel or a tire chamber. The apple, geometrically, is almost a toroid, but it does not have a central hole because the radius of the generating circle is larger than the radius of guiding circumference. When our mouth bites the apple it is tearing out outer sections of that sphere leaving a new geometric figure, the rest. That means mutxikina, what remains of the apple after subtracting its outer surface from snacks, something conceptually similar like Manu Muniategiandikoetxea has done with the works of this exhibition.

The paintings or two-dimensional pieces that he now shows have their origin in the works of the artist’s previous exhibition in the gallery, “Du, da (has, is)”, concrete pieces with a repetitive geometric pattern, the schematization of the constructive elements of a small landscape of Cezannes watercolour, Cistern in the Park of Chateau Noir 2, in which he finds a relation of the elements that make it up to three axes and their repetitions. The material basis of the current paintings is not concrete as then, but wood, and the formats have been considerably enlarged, but the action of subtracting, of reducing elements, both formal and material, has increased. The elimination of superfluous components in the frames leaves its wooden structure naked and the economy of means at the time of executing them is practically reduced to the action of boring it to evoke the forms that are created with the marks resulting from that action.

The sculptures, meanwhile, respond to the same conceptual scheme. They belong to the third generation of Rodchenko No. 21, but the action of subtracting and reducing them has been stripping them of many of their most recognizable elements, they have possibly forgotten their origin and are no longer just evocative fragments of an avant-garde language. It is as if a destructive event had broken the previous compositions by depriving them of their meaning, and, although they have a material and formal memory of what they were, they now have another meaning.

MANU MUNIATEGIANDIKOETXEA (Bergara, 1966), graduated in Fine Arts from the University of the Basque Country in the specialties of Painting and Sculpture. He has exhibited individually in institutional halls like Sala Rekalde of Bilbao (Ni ez nain hemengoa in 2004), CAB. Centro de Arte Caja de Burgos (Baga biga higa in 2007), Koldo Mitxelena Kulturunea in San Sebastin (Behar Gori Primavera Azul in 2008), La Conservera de Murcia (Night Flight in 2010) and the Jorge Oteiza Museum Foundation in Alzuza, Navarra (Interpretations 7 in 2014) and in outstanding collective exhibitions such as the Young Art Exhibition (Spanish Museum of Contemporary Art, Madrid 1994), Mutant Painting (MARCO, Museum of Contemporary Art, Vigo 2006) or Future Plans (Baluarte, Pamplona 2007). He has participated in important international fairs such as ARCO, FRIEZE ART FAIR, ART BASEL MIAMI BEACH (in the 2004 edition with the individual project Orain, Berriz, Gulliver in the Art Positions sector) or CIGE. China International Gallery Exhibition (in 2008 with the individual project The Forest of Oz / Oz’s Forest). He has obtained, among others, the First Generation 2000 Award of Caja Madrid, the Gure Artea Prize
of the Basque Government in 2000, the Endesa Scholarship in 2001 and the Altadis Scholarship in 2005, among other outstanding public and private collections in The Museo Nacional Centro de Arte Reina Sofa in Madrid, the ARTIUM Museum in Vitoria,
the University Museum of Navarre in Pamplona, ​​the CIFO Fontanals Cisneros Foundation in Miami, the Union Fenosa Collection in La Corua, the Contemporary Art Collection Patio Herreriano Museum in Valladolid, CAM Collection of Valencia, the Altadis Collection, the Caja Madrid Collection, the Kutxa Collection, the Caja Burgos Collection, the Junta de Extremadura Collection, the Autonomous Community of Murcia Collection, the Alava Museum of Fine Arts, the Banco de Spain, the L’Oreal Collection, the Coca-Cola Spain Foundation or the Pamplona and Vitoria City Halls.