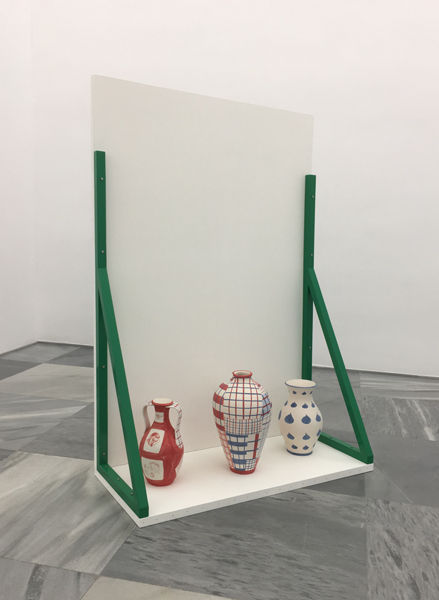 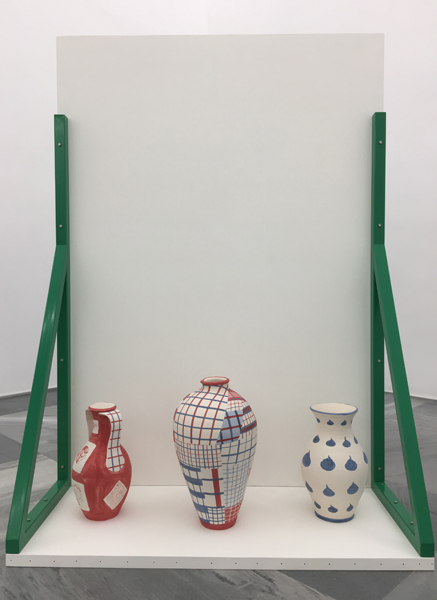 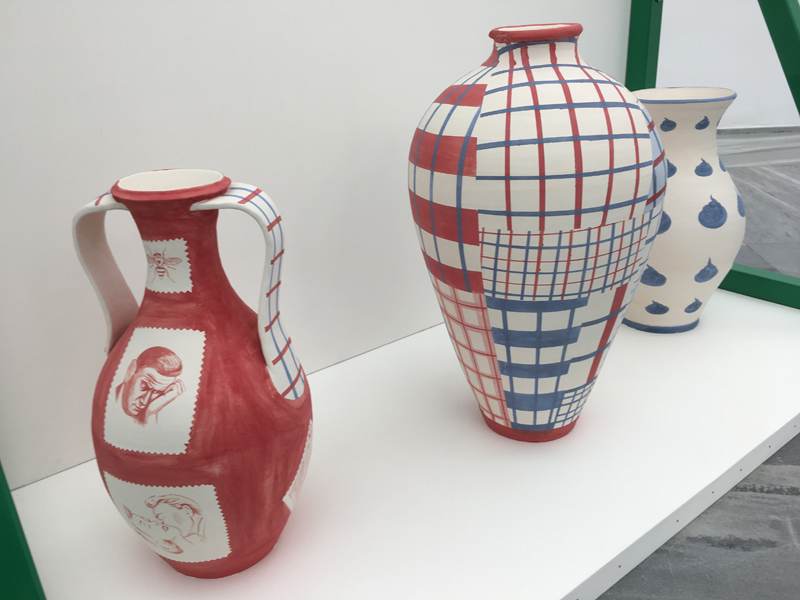 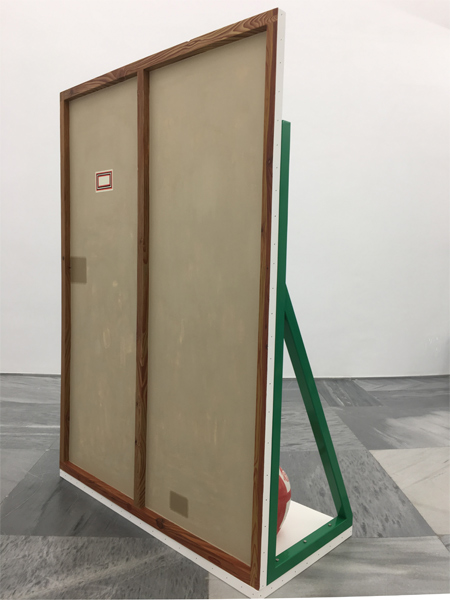 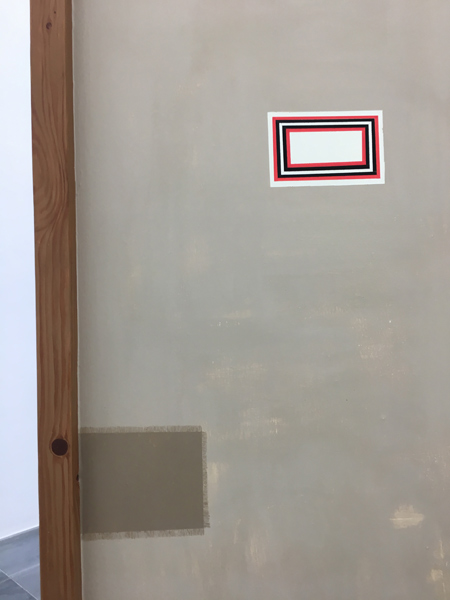 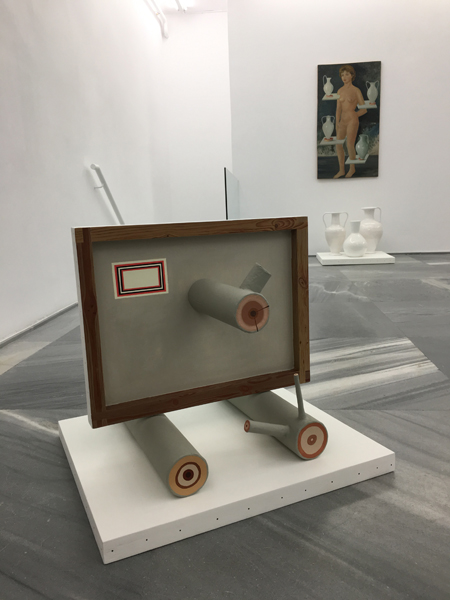 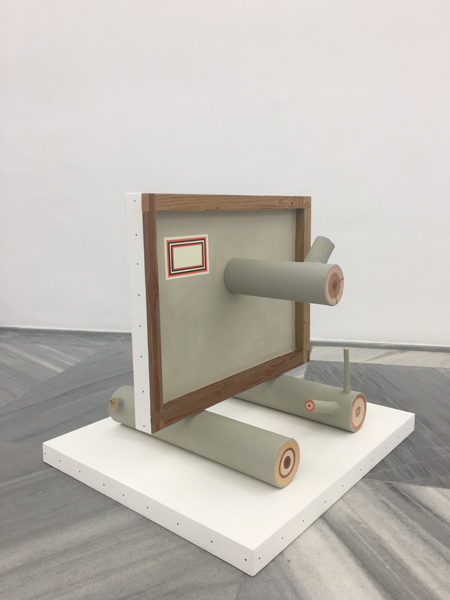 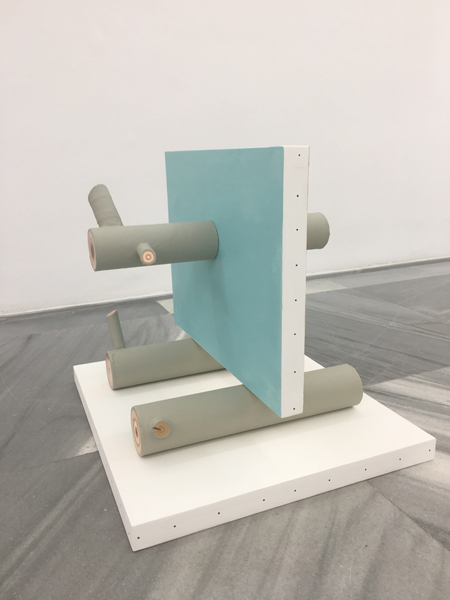 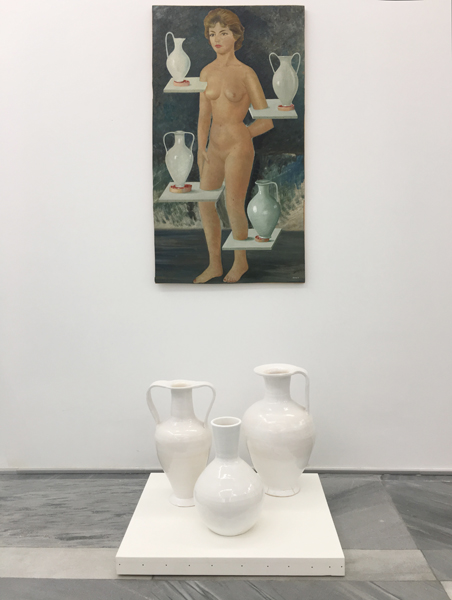 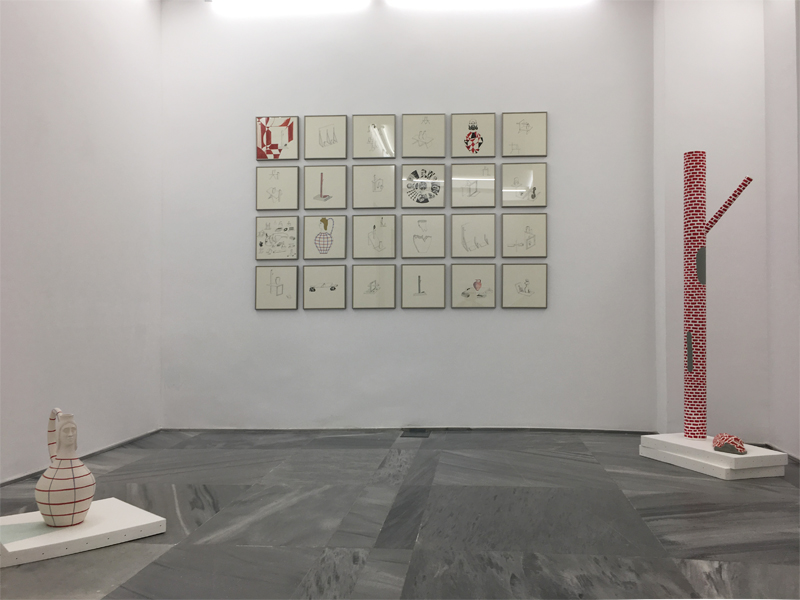 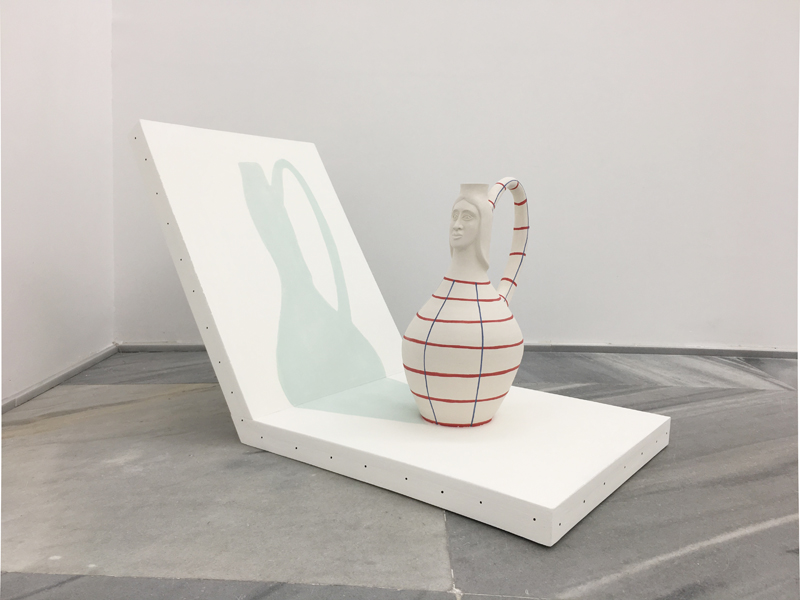 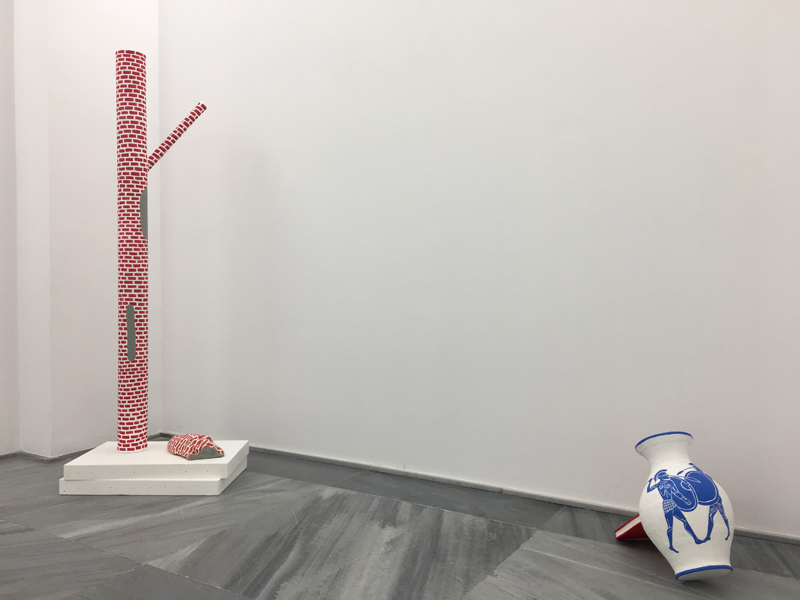 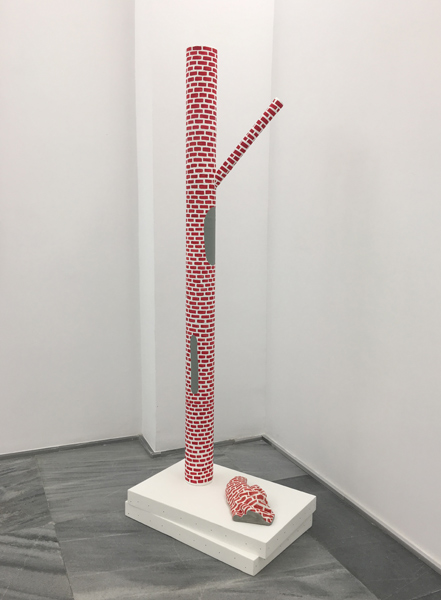 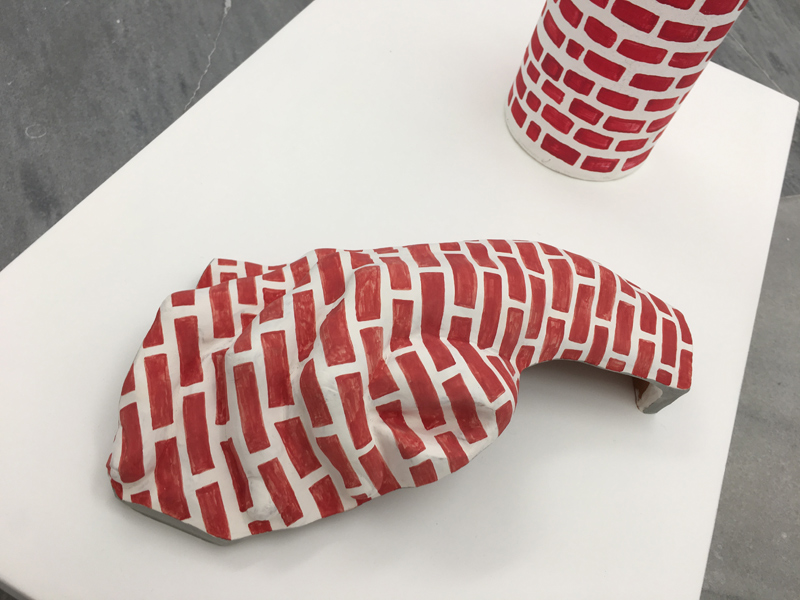 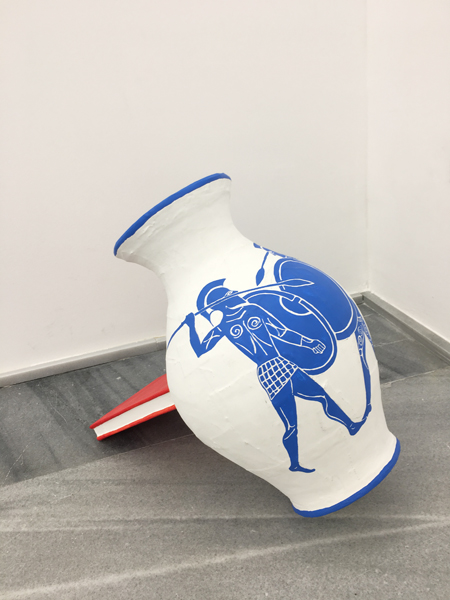 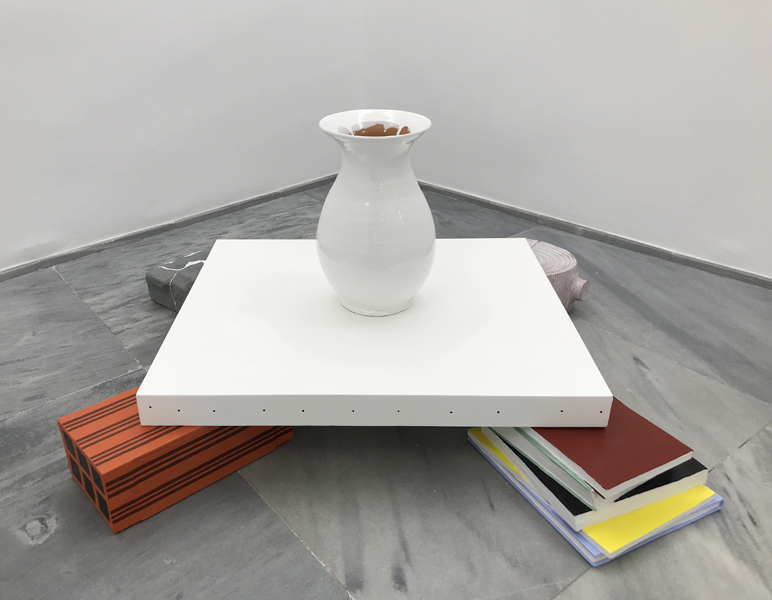 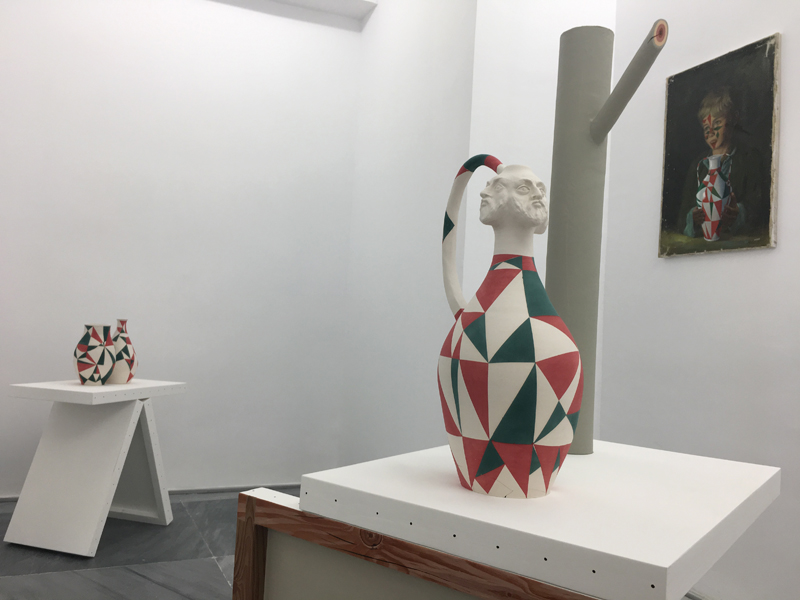 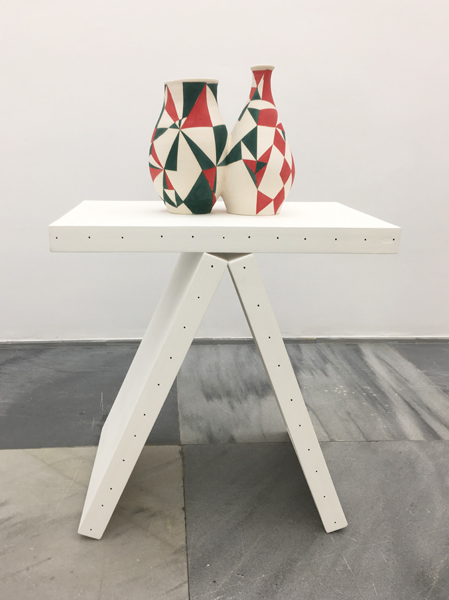 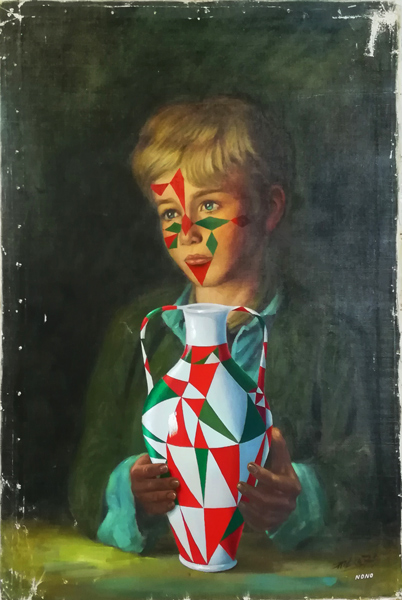 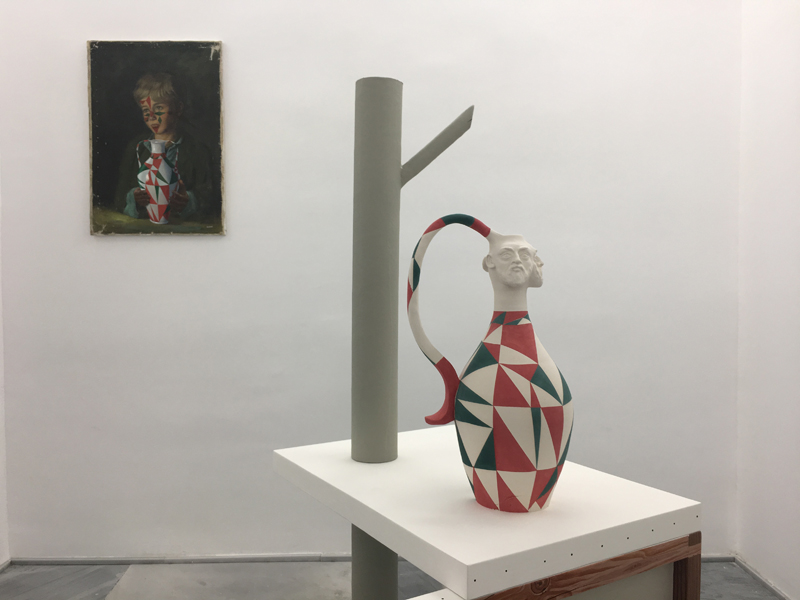 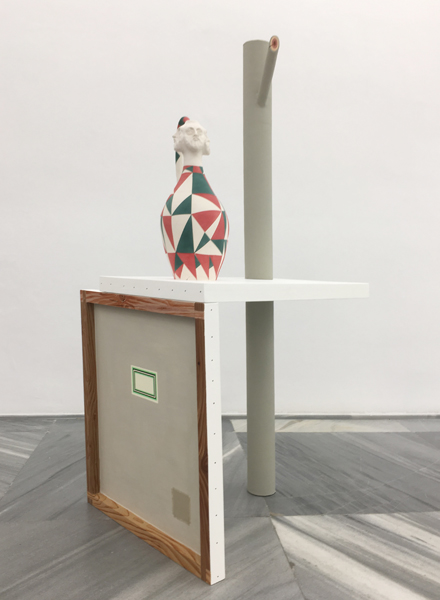 Juan:   Do you remember that Friedrich’s painting of a broken ice-sheet? Sometimes I have thought of him as a premonition of the cubism that Cezanne inaugurated…

Do you think that Picasso thought of Friedrich, even more than Cezanne, when he invented cubism?

René:   Well, they are influences…

Juan:   …or refulgences. I mean that, when you are painting, you know that each painting contains all the others, as if it were the thread of an endless canvas to which each painter contributes complacently or reluctantly, to complete it.

Michel: Maybe you mean to incomplete it. I imagine it more like a game of fraying, in which each painter unravels a knot to bare the look.

René:   There is not much difference. What hides, reveals; what reveals, invisibilizes…

Desayuno en la hierba (The Luncheon on the Grass), title “stolen” from a painting by Manet, is the eighth solo exhibition of NONO BANDERA in Espacio Mínimo gallery, in which the artist developes the body of work started at his previous exhibition at MCO ARTE Contemporânea in Porto, El jarrón sonriente, during the past months from December to February, and that supposed a significant turning point in his artistic career.

I am under the impression that Nono Bandera’s aesthetics - Fernando Castro-Flórez wrote in the catalog of the aforementioned exhibition - does not have so much to do with memory or uncertainty, but rather with the need to start with something apparently insignificant yet at the same time loaded with meaning. This artist reinvents the “pittura di cose piccole. (…) I consider that, ultimately, the paintings, drawings, objects and “miscellaneous appropiations” by Nono Bandera refer to the genre of still life, to that “portrait of domesticity” that can lead us to understand the vanity of everything.

What Nono Bandera has generated for his exhibition -continued Castro-Flórez in the same text- a series of “replicas” or object-based “optical illusions”. If the tree trunks, as we have already seen, are made of cardboard and canvas, those very canvases that are used as anomalous stands for the urns “are not real” (if it is that the word real “really” means something that “in reality” we can use to establish some degree of credibility) but instead they are made of wood. The urns are “what they seem”, that is, (resorting to truisms), urns that could bear Frank Stella’s motto “what you see is what you see”.

The Works of NONO BANDERA feeds on the circumstances and life experiences that have marked his own life, so his iconographic sources, and his emotional register, are very varied. Also the techniques and materials used to carry it out. In the pieces that make up this exhibition there are painting, drawing, sculpture or ceramics in a kind of formal and conceptual collage. In artist’s own words at the same catalog supra, All throught art history three recurrent themes have roomed together: life, love, and death, three unfathomable mysteries. Saying something substantial on these three subjects demands knowing what has already been said so as to avoid repetitions. After having constantly metabolized so many preceding images, we should ask ourselves whehter art is in itself a huge exquisite corpse made up of big doses of love, life and death. Indeed, is art not – in Duchamp’s own words- a game among all people of all eras?

The exhibition is completed with a limited edition publication-work for which has had a text by Juan Luis Moraza.

NONO BANDERA (Málaga, 1958) studied Fine Arts in Madrid and Mexico D.F end he is  Professor at the Faculty of Fine Arts of Pontevedra. He exhibited regularly since 1995 in private galleries and Spanish and foreign public institutions and has participated in several international art fairs as ARCO in Madrid, FRIEZE ART FAIR in London, ART BASEL MIAMI BEACH Miami, ZonaMACO in Mexico DF, ARTISSIMA in Turin, CIGS in Beijing, SH Contemporary Shanghai …