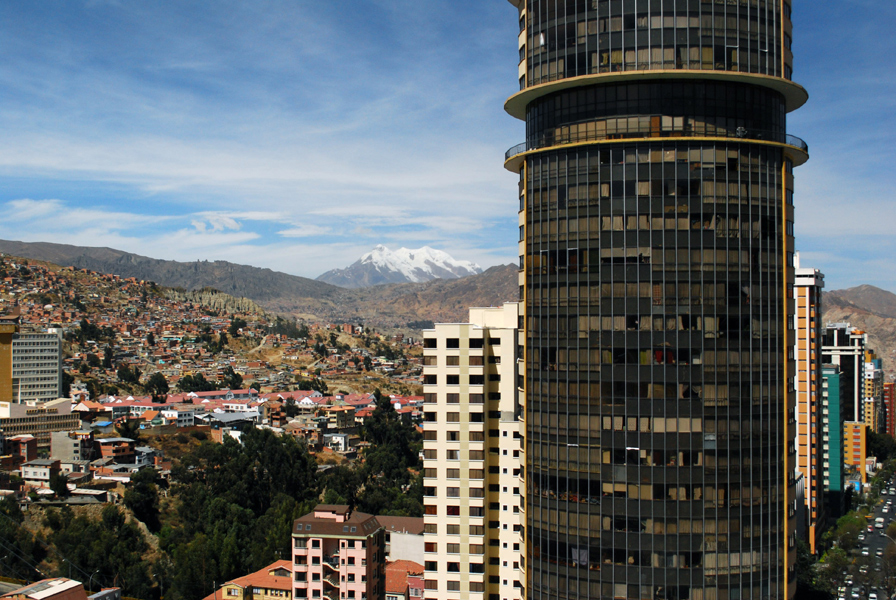 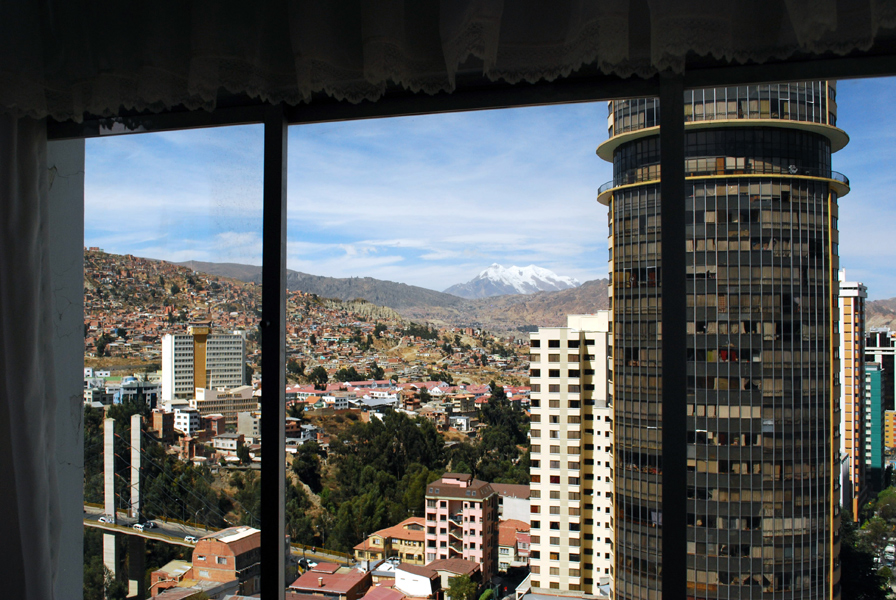 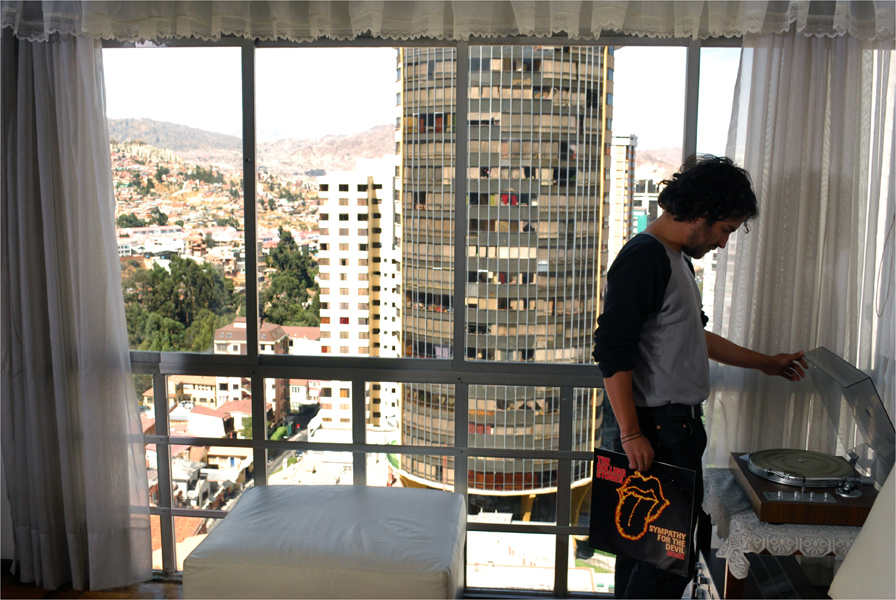 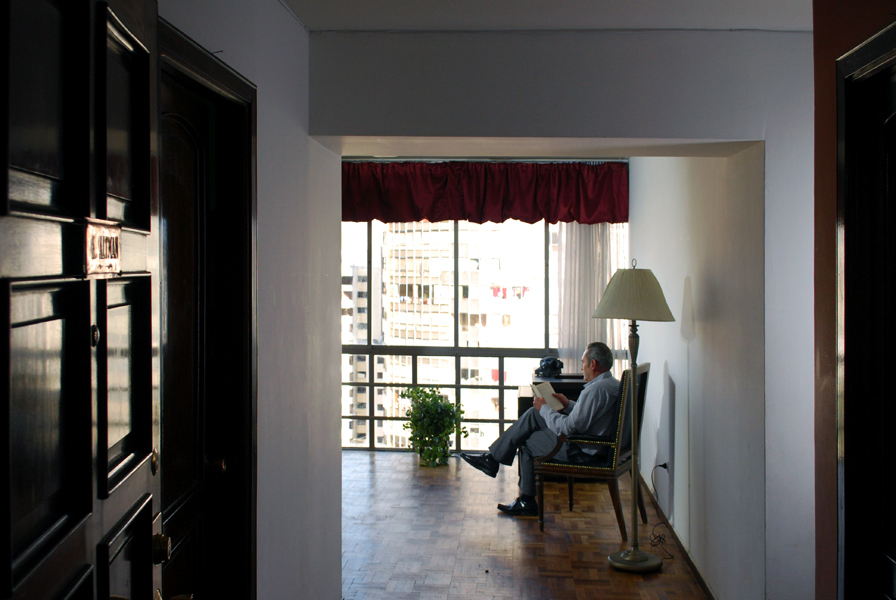 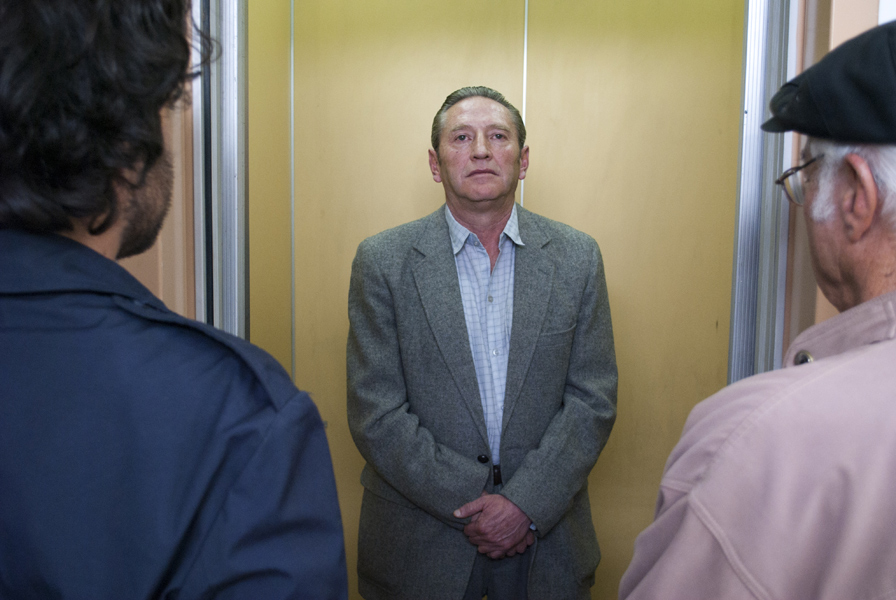 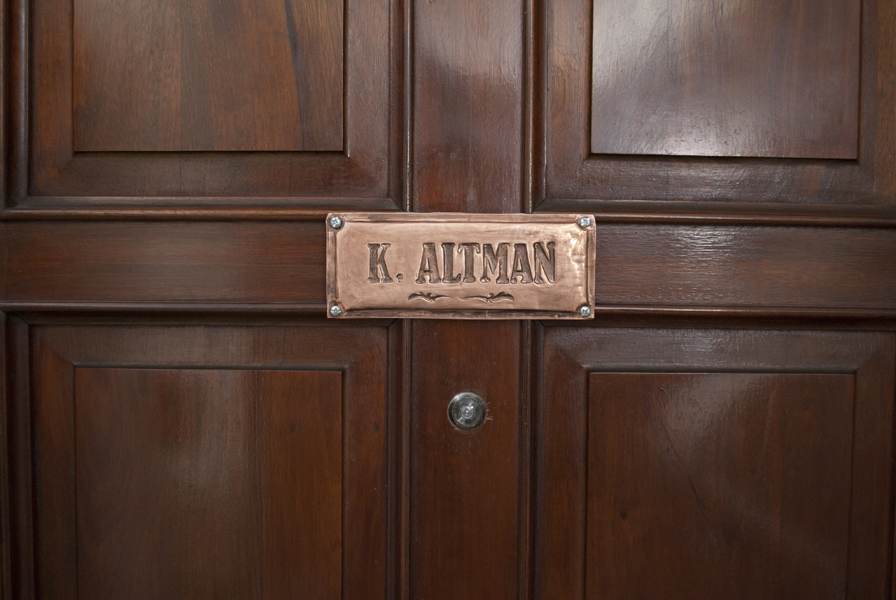 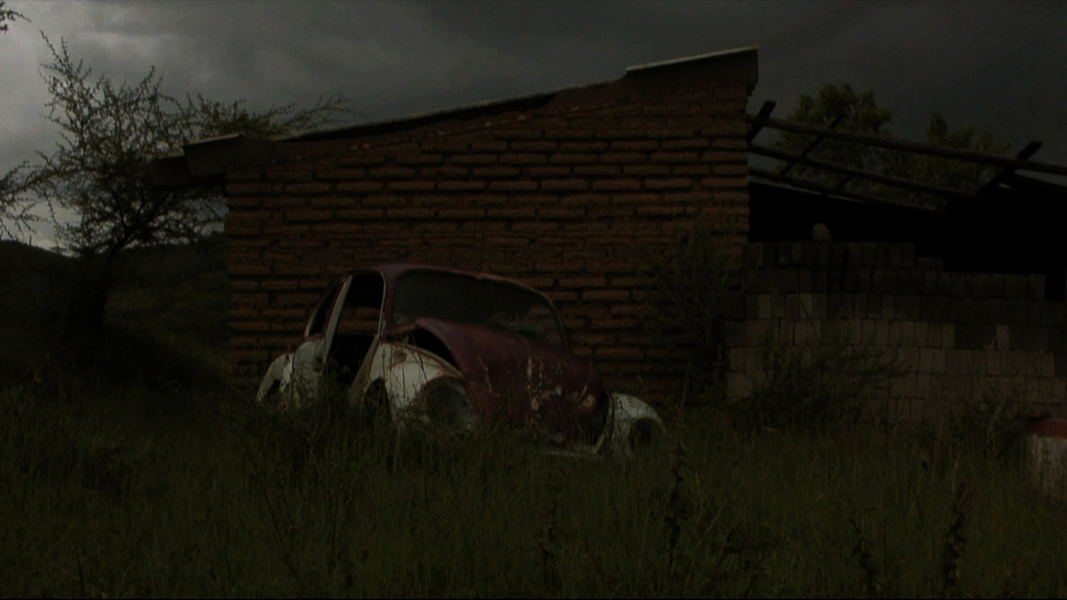 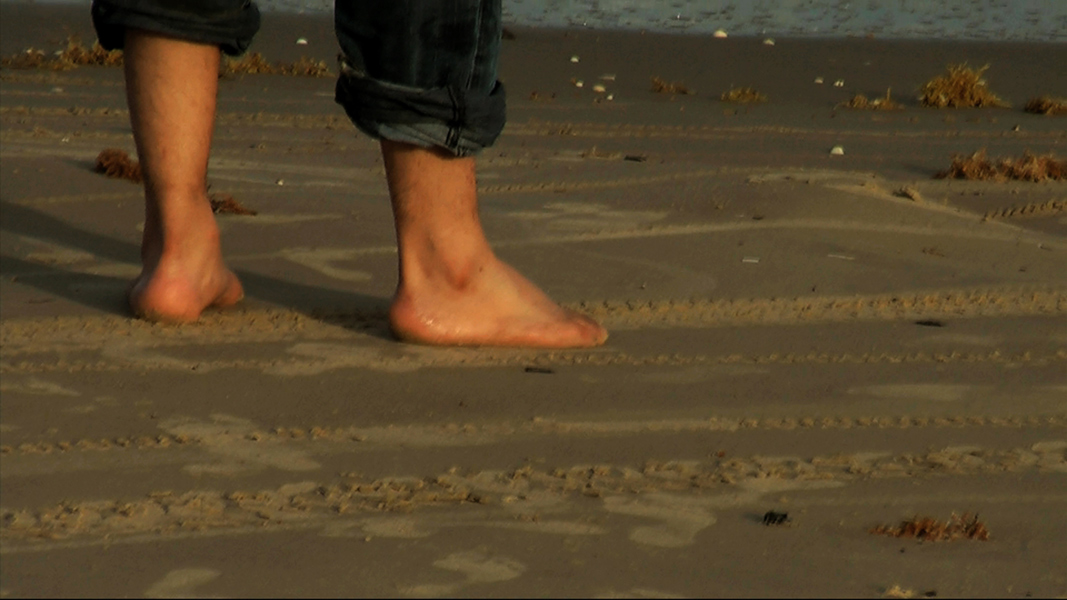 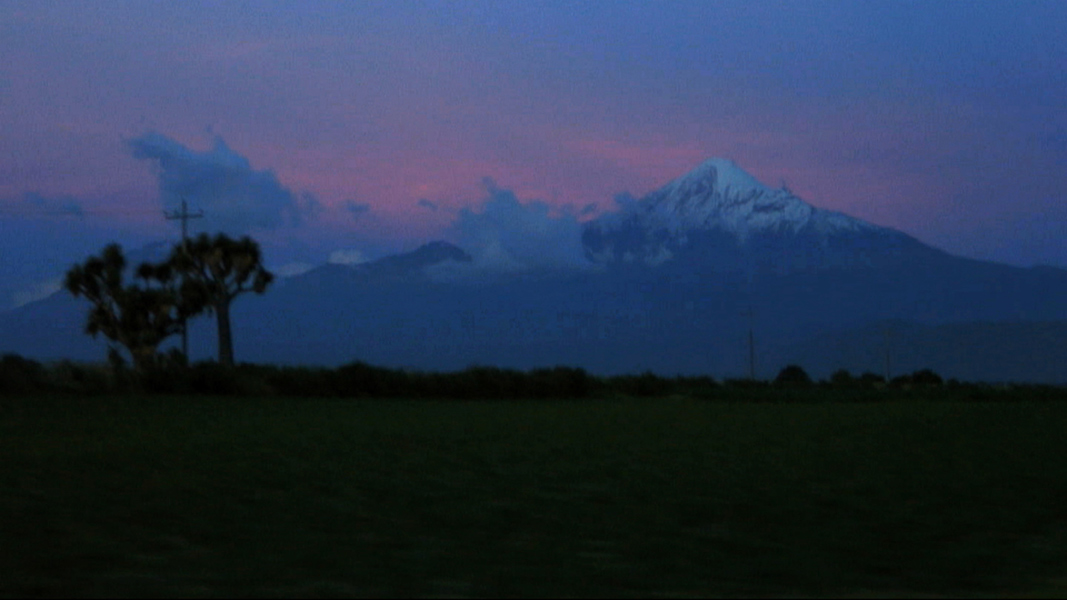 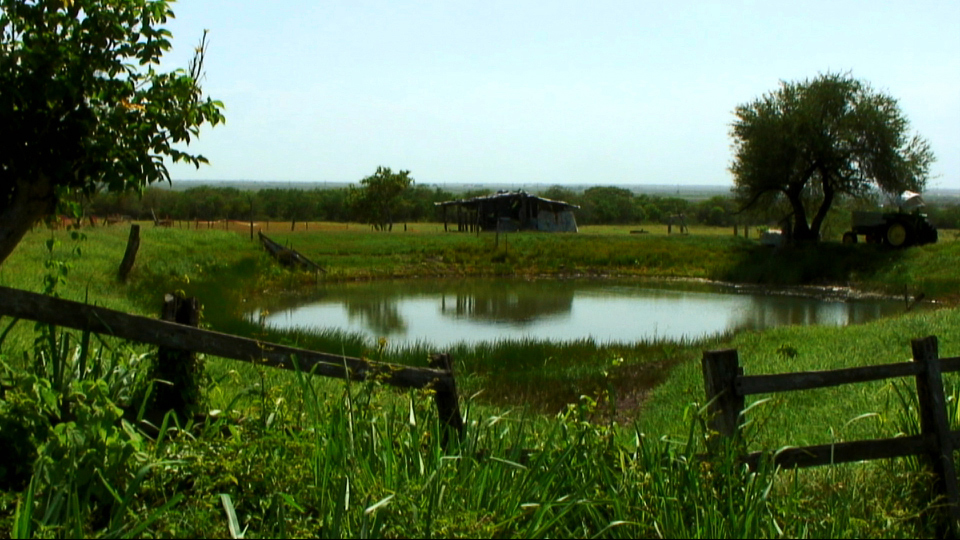 Espacio Mínimo gallery presents Recuentos, a project curated by ISABELA VILLANUEVA with some video works of four Latin American artists. The curator writes the following about it:
Every art piece tells a story, and this exhibition brings together the work of a group of young artists who examine historical events and their repercussions on the physical and symbolic environment that surrounds them. Everything through the videos of EDGARDO ARAGÓN, MARILÁ DARDOT, CLAUDIA JOSKOWICZ and ENRIQUE RAMÍREZ who explores different ways of representing events, searching for new perspectives to capture social and personal memory, and questioning if certain moments reverberate in the environment. They are united by the interest in the reflective process, for more than visiting the facts of the past and presenting allegories, they are interested in generating correspondences and analogies with the problems of the present.

In his documentary “Matamoros” Edgardo Aragón uses the “road movie” format to recreate the trips that Pedro Vásquez Reyes made a lot of times from Oaxaca, in southern Mexico, to Tamaulipas, on the country’s northern border to smuggle drugs to United States in the late 1980s, but the video more than tackling the problem of drug trafficking, or presenting the protagonist’s introspection, is a reflection on the Mexican landscape, Matamoros raises a question about the construction of memory, because the things showed are constructions or visions but not a reliable reality.
“Diário” by Marilá Dardot presents the artist writing with water the most shocking headlines of newspapers in a concrete wall, so in a few seconds they are dissolve or erase. Filmed in January 2015 the first headline which appears is the terrorist attack of Charlie Hebdo in France, and the last one narrates another attack in a mosque in Pakistan. The video is not only a commentary on the ephemeral of the news, but also emphasizes the cyclical nature of world events and shows how history is a collection of irremediably repetitive and simultaneous facts.
The video installation “Sympathy for the Devil” by Claudia Joskowicz recreates a meeting between two neighbors of La Paz, Bolivia: a Polish Jewish refugee who emigrated to South America during World War II and the ex-nazi Klaus Barbie, who at the time was living in Bolivia Under a pseudonym. During the 1970s, both men lived parallel lives as neighbors, mutually aware of each other’s existence and meeting daily in the elevator. The videos, filmed by Joskowicz with masterful long shots, are dedicated to questioning the story and its repercussions on the physical and symbolic landscape. The work also addresses how media technology redefines memory, reality and historical facts.
Finally, the film “Pacífico” by Enrique Ramírez presents us an abrupt, unpredictable and imposing sea. The artist uses the ocean as an allegory of the social and political history of Latin America, but in particular of Chile. Ramírez is referring specifically the Operation Condor: the military and political alliance between the different dictatorships installed between the 70s and 80s in the South American countries, and their practices of throwing corpses of political prisoners to the sea to make them disappear without trace forever. The ocean is a metaphor of the emotional burden of a past that should not be forgotten.
These four artists, from different generations and coming from different countries, presents new ways of representing memories and lived events in a world marked by turbulent political processes. Through different methodologies Aragón, Dardot, Joskowicz and Ramírez try to talk about the past to fill it with new sensations that recode all their meanings.
We want to thank the curator, artists and galleries Mor. Charpentier (Paris) and Vermelho (Sao Paulo) their collaboration for the realization of this project.

Isabela Villanueva is an independent curator and cultural producer based in New York. She has a M.Litt in History and Art Expertise from the University of Glasgow, Scotland, and a Master’s degree in Modern and Contemporary Art from the University of Cambridge. She was recently one of the commissioners of the XIV Mendoza Award in Caracas, commissioned the Projects and the Latin American section of Art Toronto 2016, co-organized the exhibition Basta! for the John Jay College Gallery in New York, she organized the ArtLima 2016 Pioneers section, the exhibition Stanislav Kolíbal: The Fundamental Drawing Element at the Merzbau Gallery in Miami, and Impronta at the Capuy Cultural Center in Caracas, among others. She was part of the Curatorial Team of the XXX São Paulo Biennial entitled The Imminence of Poetics, under the direction of Luis Pérez Oramas (2012) and organized its traveling exhibitions in several states of Brazil (2013). From 2006 to 2011 she served as Assistant Commissioner of the Art Gallery of the Americas Society in New York, where she worked in several exhibitions including: Ad Usum: To Be Used. An Exhibition of The Work of Pedro Reyes, Carlos Cruz-Diez: (In) formed by Color, Dias and Riedweg … And It Becomes Something Else, Marta Minujín: Minucodes and Arturo Herrera: Les Noces among others. She was a member of the Advisory Committee of the recent Biennial of Borders (2015); And has participated in several symposiums and round tables including: Biennials in alternative venues in El Museo del Barrio (2014), Calle Tomada: La Calle en America Latina at Columbia University (2013), Modern Latin American Art in Arte Américas (2010) and International Forum of Contemporary Latin American Art, at the Institute of Fine Arts, New York University (2009).

Edgargo Aragón (Oaxaca, Mexico, 1985), where he lives and works. He holds a degree in Visual Arts from the National School of Painting, Sculpture and Engraving “La Esmeralda” in Mexico. His work has been shown in Jeu de Paume, Paris (2016); University Museum of Contemporary Art (MUAC), in Mexico (2012); MOMA PS.1, New York (2012) and LABoral Art Center, Gijón (2011). He has also been part of group exhibitions such as Resiting the Present, Musee d’Art Moderne de la Ville de Paris (2012); Available: A Kind of Mexican Show, San Francisco Art Institute, San Francisco (2011) and The Horizon of the Mole, Palais des Beaux-Arts, Brussels (2010). His work has been integrated into the 3rd Moscow Biennial for Young Artists, the 12th Istanbul Biennial and the 8th Mercosur Biennial. His videos have also been shown at film festivals such as Werkleiz, FID Marseille and Ambulante in Mexico.

Marilá Dardot (Belo Horizonte, Brazil, 1973) Lives and works in Sao Paulo. She was graduated in Social Communication from UFMG, Belo Horizonte and holds a Master’s Degree in Visual Languages from the School of Fine Arts UFRJ in Rio de Janeiro. Her work has been shown at the Cultural Center of Banco do Brasil in Rio de Janeiro; Lasar Segall Museum in Sao Paulo and the Pampulha Art Museum in Belo Horizonte individually. She has been commissioned outdoor projects for Inhotim Institute of Contemporary Art in Brumadinho, Brazil and the Wanas Foundation in Knislinge, Sweden. Has also exhibited at the Museum of Modern Art in Sao Paulo, Museum Beelden aan Zee in Holland, DHC / Art Foundation of Contemporary Art in Canada and Musée d’Art Contemporain in Lyon, France. She recently participated in the Residence Programs at Krizinger Projekte in Vienna, Austria and the Wabi House in Oaxaca, Mexico…

Claudia Joskowicz (Santa Cruz de la Sierra, Bolivia,1968). She lives and works in New York. She received an Applied Arts Master’s Degree of New York University in 2000. Her work has been showed at the Guggenheim Museum in New York, the Cartier Fondation pour l’Art Contemporain in Paris, France; THE Roskilde Museum OF Contemporary Art in Denmark, the 10th Sharjah Biennial, 29th Sao Paulo Biennial, 10th Havana Biennial, 17th and 18th Videobrasil festivals of Sao Paulo, Traneudstillingen in Copenhague, Slought Fundation of Philadelphia, LABoral Center for Art and Industrial Creation in Gijón, Spain, among others. Recent awards include a commission for mid-career artists from Cisneros Fontanals Foundation of Miami, a Guggenheim Foundation Film/Video Scholarship in 2011, an award at Videobrasil Film Festival, and a Fulbright Scholarship from the Hispanic Arts Association in New York, among others.

Enrique Ramírez (Santiago, Chile, 1979) currently lives and works in Paris. Degree in Audiovisual Communication, with Mention in Cinema of the Professional Institute ARCOS of Santiago de Chile. He completed a Master’s Degree in Contemporary Art and New Media at Studio National des Ats Contemporains of Le Fresnoy, France. His work has been showed in Jeu de Paume, Paris; Amparo Museum, México; Museum of Memory and Human Rights, Santiago de chile; Palais de Tokyo, Paris; Videobrasil, Sao Paulo and the Biennal od the Image in Movement of Buenos Aires, among others. He has been awared with the Prize of the Associated Visual Arts Fundation of Chile, the LOOP-Hotels Catlania award or the Prix Découverte des Amis du Palais de Tokyo. He will be part of the exhibition “Viva Arte Viva” curated by Christine Macel on the next 57 Venice Biennale.