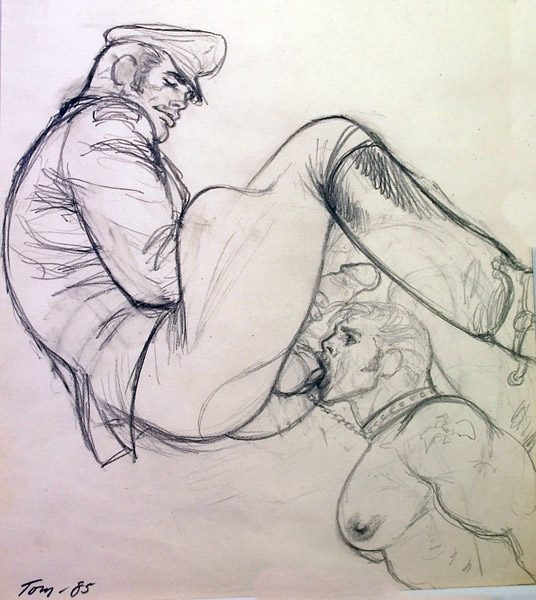 Born in Kaarina, Finland, in 1920, Touko Laaksonen –his real name- began his formation in graphic design in Helsinki in 1939. A year later, his country became involved in Second World War and in 1941 he was called to duty. His fascination with some elements that will mark his ideal of masculinity, such as uniforms or leather clothing, arose from this. It is at this time when he started to do his first erotic drawings. In these works, generally watercolours, his characters had a naïf quality reproducing some of the topics about gay men such as femininity or marginality. In the early fifties, the same moment when his career as graphic designer started, he developed his photorealist style characterized by an obsessive attention to detail, an excessive definition of images and an effective use of chiaroscuro. Moreover, these drawings contained fundamental elements of his future oeuvre: a very intense erotic charge, some humorous touches and, crucially, an extremely positive attitude towards sexual activities between men. During Touko’s youth, homosexuality was considered as a handicap or even a perversion, but since the fifties, at least in his drawings, homosexuals will show themselves open and virile, enjoying their free and positive sexual encounters in happy stories with joyful endings. Since then and up to the seventies, his works stressed an illustrative sense.  From 1973 on, the moment when he dedicated himself exclusively to drawing, he showed a higher attention to technique, developing the works in various stages including: plot development, disposition of the scenes and characters, and detailed studies of each male figure and objects which required a special treatment. Finally, all the sketches would be transferred to definitive drawing to allow their publication. These final works were pencil drawings and were sometimes finished with ink, tempera or watercolours.

For the creation of the works he found inspiration in pornographic magazines, in agitprop posters of Soviet and Nazi armies, in fashion and street culture, but, above all, in the early body building magazines that he had collected since the 50s. He also found inspiration, particularly for compositions, in works of the master painters of renaissance and baroque, although, as himself pointed out, the final purpose of his drawings was not artistic but pornographic. His main purpose was to provoke excitation, and to achieve it, he resorted to capture on the paper his most unashamed and joyful fantasies. Nevertheless, his works shared sensibility with representative artists of the American underground avant-garde of the 70s. Above all, regarding the consideration of his works as a link between high and low culture, Tom of Finland became a seventies reference artist.

Because of the lack of personality in his characters they became icons of masculinity. To build this ideal TOM OF FINLAND focused on diverse stereotypes that, through time, have been considered depositaries of virility -soldiers, sailors, policemen, jailers- awarding them with an exaggerated formal perfection and an exacerbated virility. Gradually, his characters echoed the shifts of four decades of changing masculine ideals. Baby skinned, hairy, muscled, tattooed, skinned or pierced characters not only reflected new trends but, getting ahead, they imposed them.

TOM OF FINLAND (1920-1991) made his first illustration in the 40s but it is not until the 50s when his drawings started to be habitually published in gay publications, and during the next three decades, he became a legend that would develop the evolution of gay aesthetics in the last decades of the XXth century. His drawings crossed the frontiers of pornographic mediums, to fill the walls of art galleries and museums. In 1991, Christies optioned in New York three Tom of Finland drawings from Robert Mapplethorpe’s collection. A bit after, he took part in Whitney Biennial of 1991, and his works were exhibited at Daniel Buchholz Galerie in Cologne, Mark Moore Gallery of Santa Mónica (USA), Galerie Enmanuel Perrotin in Paris, The New Museum in New York, Los Angeles County Museum of Art and the Whitney Museum of New York. His work is present in important collections such as the Museum of Contemporary Art in Helsinki, Los Angeles County Museum of Modern Art in San Francisco, or the MOMA in New York. 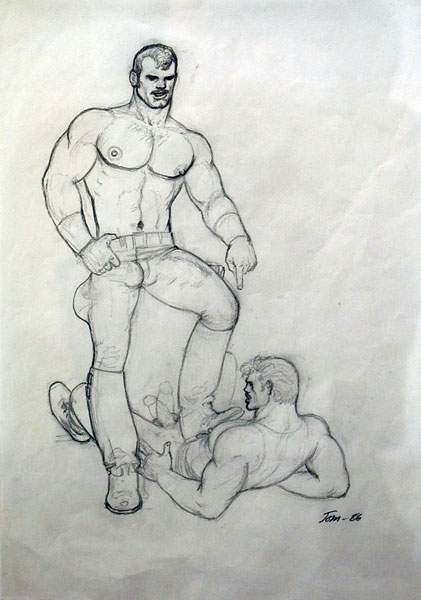 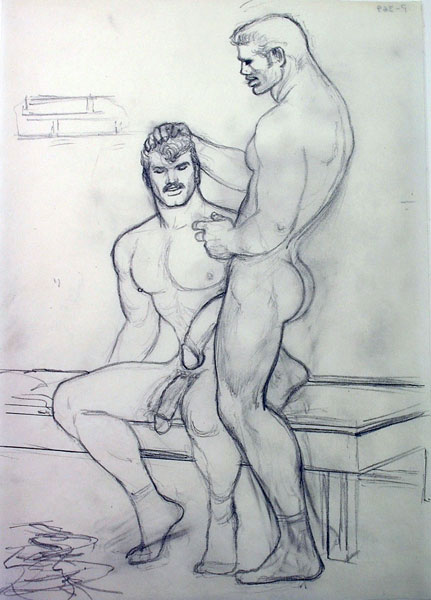